Quality Street has introduced a new flavour for Christmas 2019 - and it has left some sweet-toothed chocoholics feeling very bitter.

A chocolate caramel brownie sounds like an excellent addition to our ears, but some fans of the sweet that has made way for its inclusion are not so convinced.

However, it seems Nestlé expects the new sweet to become a hit because special edition tins solely made up of the turquoise-wrappered treat have been stocked on Asda’s shelves.

The tins - exclusive to the supermarket chain - are priced at £4 and weight 280g.

Scores of fans have expressed on social media just how much they’re looking forward to scoffing down the chocolate caramel brownie - but there are others who have strongly objected because it has replaced one of their favourites.

The new Quality Street tastes that good it's making me hope for the future again.

"The chocolate caramel brownie in quality street is honestly life changing," enthused another.

A third contributed: "'Chocolate Caramel Brownie' will be your new favourite Quality Street. You heard it here first. @ me."

The ultimate pick & mix is now available in selected @johnlewisandpartners stores! What favourites are going in your tin!? 💜

And another person added: "The new caramel chocolate brownie Quality Street tastes that good it’s making me hope for the future again."

But there were also many people particularly put out that the new sweet had replaced the Toffee Deluxe, two years after that flavour had been brought back into the Quality Street selection. 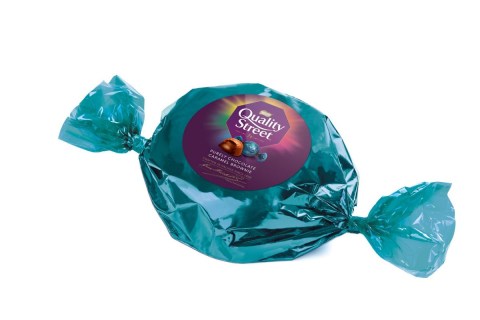 Not every Quality Street fan is happy with the new flavour (Credit: Nestle)

"I only ever bought Quality St for the toffee deluxe," moaned another.

A third stated: "No comparison to the #toffeedeluxe that you replaced. Really bad move!"

And another claimed: "The new chocolate caramel brownie flavour tastes like it fell into the discontinued coffee one that past it's sell-by date."

What do you think to the new colour! Have you tried our new #Chocolate #Caramel #Brownie Sweet yet? pic.twitter.com/hZ3Gccz4tj