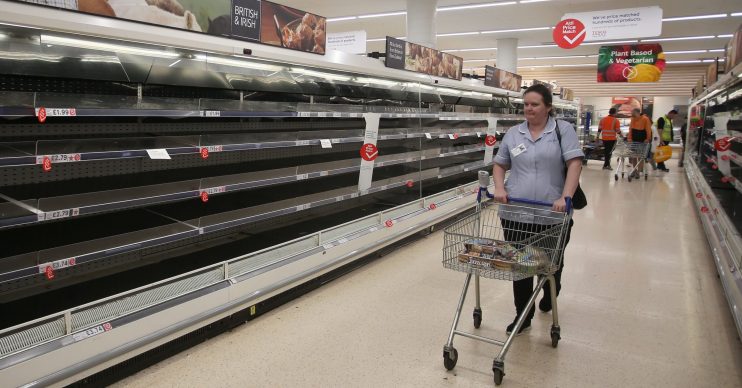 Coronavirus: Shoppers try to get access to NHS opening hours by posing as NHS staff

The incident happened in London amid COVID-19 stockpiling panic

Selfish shoppers at a London Tesco store reportedly posed as NHS workers to get early access to the store during this weekend’s NHS opening hours.

Doctors, nurses and 111 operators apparently faced queues stretching 600m as they attempted to get into the store to shop for essential items.

The introduction of NHS opening hours came as stockpiling shoppers cleared shelves across the country amid the coronavirus pandemic.

The Mirror reports that customers who were not entitled to the extra shopping hour tried to sneak past security staff and jump the queue in a bid to get into Tesco early.

One family are said to have “argued with security staff and rammed their trollies into the barriers when their attempts to join the NHS shopping hour failed”.

Now is the time for people to look after us so that we can look after you but they are not listening.

Nurse Francesca Hamilton revealed she arrived at the store at 9am but left the queue to help Tesco staff manage the crowds.

She said: “I am surprised people have tried to jump the queue. It’s unbelievable. Now is the time for people to look after us so that we can look after you but they are not listening.”

She added: “If people respect the government’s advice that they have set out for NHS workers then it would be fine but people are not following that.”

However, far from supporting NHS workers, some nurses have revealed they have been subjected to vile abuse in the streets.

Read more: The Chase star Paul Sinha suspects that he has contracted coronavirus

Dozens of NHS workers are said to have spoken out about being abused and discriminated against by members of the public, their trade union has said.

Some said they have been called “disease spreaders” and “spat at” by members of the public.

The new NHS opening hours came after supermarkets introduced elderly opening hours to serve the most vulnerable members of the community.

Hundreds of shoppers were yesterday seen queuing outside supermarkets up and down the country as Boris Johnson essentially cancelled all Mother’s Day plans, urging children to enjoy Skype or FaceTime sessions with their mums instead.