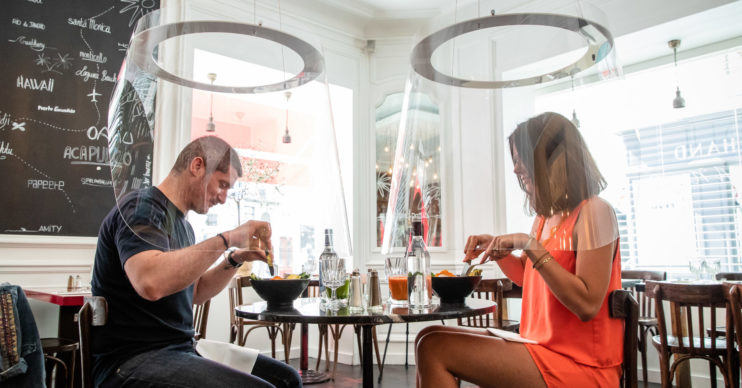 The future of eating out?

Dining inside plastic bubbles could be the future of eating out as restaurants gear up to reopen once lockdown lifts.

Boris Johnson has hinted that pubs, restaurants and hotels could open as soon as next month.

However, this would be on the provision that they could ensure the safety of restaurant-goers when it came to halting the spread of coronavirus.

One way of doing that might be to introduce a new plexiglass lampshade-style bubble.

It hangs from the ceiling and has been invented by French designer Christophe Gernigon.

A cut out at the back allows a diner to enter and exit.

There’s a gap at the bottom so diners can reach through to grab the salt and pepper, too.

It’s thought it would make it safe for two diners who don’t live together to meet for dinner.

I wanted to make it more glamorous, more pretty.

Waiters could also safely navigate the restaurant to take orders and bring them to the table.

The Plex’Eat prototype plexiglass bubbles were launched in Paris, where diners demonstrated how it could work.

Plex’Eat is said to be simple to set up and take apart and easy to clean and disinfect.

It’s also adaptable to all types of establishments and boutiques, as well as public places to protect guests and clients during the COVID-19 pandemic, according to the designer.

Gernigon said similar products on the market looked like “prison booths”. As such, they weren’t inviting to the customer.

He said: “I wanted to make it more glamorous, more pretty.”

The shields go into production next week.

Earlier this week, the PM said ministers are trying to go as fast as they can” to reopen the hospitality industry.

He added: “It is really difficult to bring forward hospitality measures in a way that involves social distancing.”

However, he continued: “But I am much more optimistic about that than I was. We may be able to do things faster than I previously thought.”

Restaurants were originally included in phase three of the government’s plan to ease lockdown, which is due to start in July.