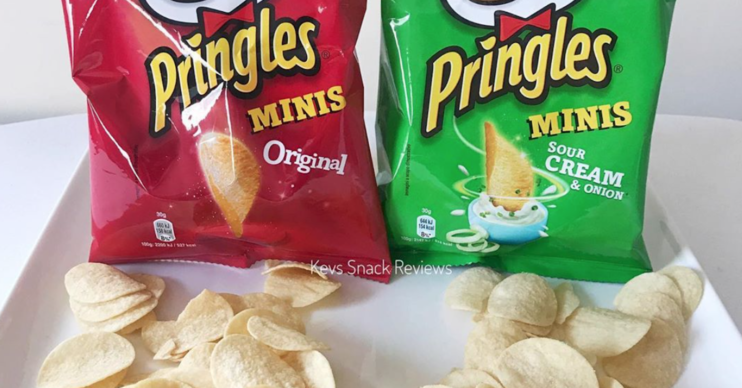 Did you have these in your lunchbox?

When it comes to the original Pringles, we all know that once you pop, you can’t stop.

However, can the same be said for Pringles Minis, which are on sale in Home Bargains now?

Well, according to some, the mini take on the humble Pringle are the “future of snacking”.

After foodie blogger Kev’s Snack Reviews posted a picture of two bags to Instagram, the comments came flooding in.

One soon-to-be fan tagged their friends and said: “The future of office Pringle snacking.”

“Yaaasss!! We would eat them all in seconds though,” came the reply.

Other fans of the mini snacks said they were a good idea because “you don’t feel as guilty eating a whole bag in comparison to a tube”.

I’m sure these existed when we were in high school – in little packets.

“Need to try these bad boys,” said another.

Others got all nostalgic and said they remember eating the snacks years ago.

“Used to get these in the early 2000s. Wondered where they went,” one commented.

“Remember eating these years ago,” one snacking fan commented.

“I’m sure these existed when we were in high school – in little packets,” said another.

“They were the best,” another said.

“Used to have them in my lunchbox!! Mega cute Mini Pringles,” said another.

The snacks were initially launched as a vending machine product at the start of the year.

They’re now on sale in single 30g packets on the shelves of Home Bargains.

Blogger Kev explained: “These are available in @homebargains for 39p a bag in Original and Sour Cream & Onion flavours currently.”

“They’re basically just Pringles, in a bag, in a smaller form. Is this a good thing?” he asked.

He said that while they “taste good “, they were “lacking the same level of flavour and satisfaction as regular Pringles”.

Kev added: “They just don’t seem right to me. They’d make nice dippers with a sauce but by themselves are a bit boring.”

Some of his followers agreed.

“We had these last week but they are not a patch on regular size. Stale tasting.”

“Better in the tubes,” commented a third.

Have you tried them? Tell us on our Facebook page @EntertainmentDailyFix.