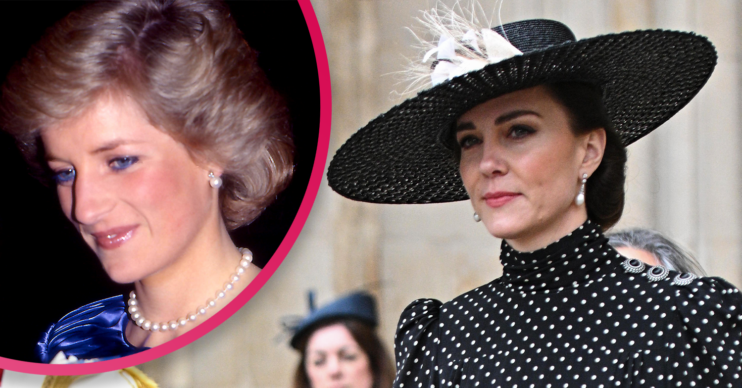 Prince Philip’s memorial service today (March 29) proved to be the perfect place for the Duchess of Cambridge to pay tribute to her late mother-in-law.

The duchess wore an elegant polka dot dress and her outfit paid tribute to Princess Diana – in more ways than one.

Of course, it’s not the only time of late that Kate has paid tribute to Diana – she also gave a nod to the People’s Princess during her recent royal tour.

How did Kate pay tribute to Diana at Prince Philip’s service?

Kate wore a black and white polka dot dress, £1,495, by Alessandra Rich teamed with a £775 Lock & Co hat for the memorial service.

The dress, with its 1980s silhouette, itself had echoes of similar styles Princess Diana wore in the past.

Read more: ‘Frail’ Queen leaves Brits in tears during God Save the Queen at memorial service

The most notable of these was when she enjoyed a day at the races back in 1986.

Diana was seen wearing a black and white polka dot dress – although the colourway was reversed on this occasion.

Not only that, Kate also chose the same style hat as Diana, its wide brim sitting at the same angle on both ladies’ heads.

There was also another subtle nod to Diana in Kate’s choice of attire today.

She chose to wear a pair of pearl earrings that once belonged to Diana for the service for Prince Philip.

And, looking at the pictures of Diana at the races, it appears she wore the pearl drop earrings with her polka dot dress.

How did fans react to Kate’s memorial outfit?

Many commented that Kate looked “gorgeous” and had a “beautiful family”.

Others did draw comparisons between the duchess’ sense of style and Diana’s.

One said: “I tell you what, Prince Philip’s death has catapulted Kate Middleton into the same ranks as Diana when it comes to fashion.”

Others seemed to agree.

One said: “The Duchess of Cambridge always smashes it in the fashion stakes – and how adorable are George and Charlotte.”

Where can I get Kate’s dress?

It’ll come as no surprise to learn that the black and white version of Kate’s dress has sold out.

However, earlier today you could still buy a navy version online.