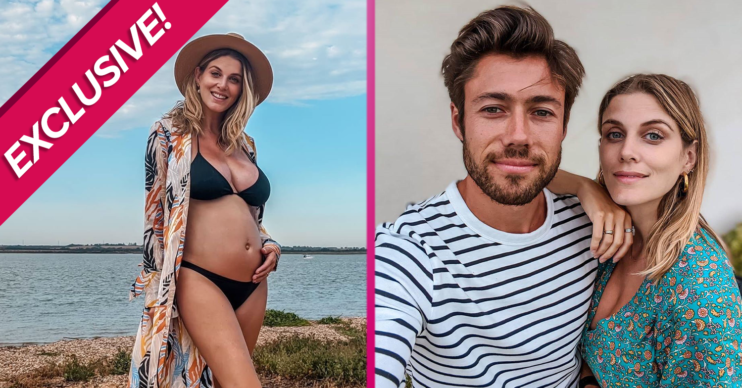 Pregnant Ashley James fears boyfriend Tom Andrews could miss her labour if Britain is hit by a second wave of coronavirus.

Earlier this year, with the virus at its peak, everything changed on NHS maternity wards.

Visitors were banned and birthing partners were only allowed to be by their partner’s side for a limited time.

Now, speaking exclusively to Entertainment Daily, Ashley has opened up about her lockdown pregnancy.

And she’s shared her fears surrounding the birth of the couple’s son.

Explaining that she’s enjoyed her pregnancy so far, Ashley said: “I guess the only parts that are more difficult are if there were to be a second wave. Obviously Tommy wouldn’t be allowed in for the labour at the hospital.

“I’m a glass half full person, so there have been some challenges,” she continued, “but there have also been lots of positives from it.”

If there were to be a second wave, obviously Tommy wouldn’t be allowed in for the labour at the hospital.

The former Made In Chelsea star recently revealed the “new normal” when it comes to NHS maternity care.

The couple went for an antenatal scan and, despite wearing masks, Tom had to wait outside until Ashley was called.

He was then ushered inside at the last minute to find out how the pregnancy was progressing.

However, Ashley said she’s not pondering the “ifs and buts” and is sure she’s in good hands with the NHS.

“I feel like there’s no point worrying. None of us really know what’s going to happen, all the ifs and buts. But there have definitely been some real positives.

Positive news amongst “all the bad”

“It’s nice when there’s so much uncertainty to be growing life and having that positive news amongst all the bad news,” she said.

One of the positives of being pregnant in lockdown meant that Ashley could “listen to her body more” and rest when she needed to.

“In my first trimester I was tired and lethargic. But being in lockdown, instead of rushing around to TV appearances and DJ gigs, it gave me a chance to listen to my body more,” she said.

“It’s been hard not being able to see my parents in person, they live up north, and my gran,” the pregnant star said.

However, Granny James has figured out how to work Zoom, Ashley said.

“We’ve been doing family Zoom calls every week, which we’re actually still doing even though we’re in a weird limbo now. I’ve probably spoken to more of the family than I would have done in pre-COVID times,” she laughed.

Ashley has also had the company of Tom during lockdown.

The pair originally met ten years ago but only started dating in October.

They started isolating together at Ashley’s home before announcing their happy news.

Ashley is an ambassador for digital security experts, Kaspersky. Visit the website here for details.