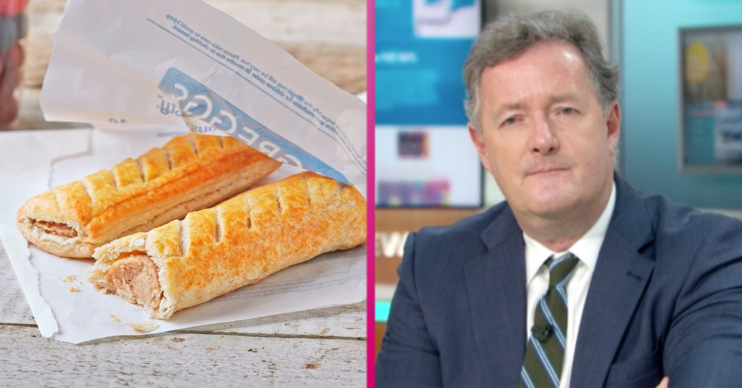 Safe to say he isn't a sausage roll fan!

Posting on Twitter, Piers said he thinks fans of the chain “need a psychiatrist”.

The Good Morning Britain host took aim at a colleague who revealed Brits would soon be able to satisfy their cravings for the bakery’s vegan sausage rolls.

He said: “The menu is limited but #Greggs will be reopening at 800 different locations from 9am… #Vegan sausage roll and steak bake #lockdown cravings can finally be satisfied.”

Read more: Holly Willoughby fans are in love with her animal-print dress

Never one to keep his opinions to himself, the fact vegan sausage rolls were mentioned clearly riled Piers.

He said: “If you still have vegan sausage roll cravings after three months of lockdown, you need a psychiatrist not Greggs.”

“Discriminative and prejudice!” said one of Piers’ followers.

If you still have vegan sausage roll cravings after three months of lockdown, you need a psychiatrist not Greggs.

“I thought @piersmorgan was all for equality and not shaming people for their beliefs, cultures or religions?” they added.

“If someone wants to be vegan Piers, that’s their choice,” another stated.

If you still have vegan sausage roll cravings after three months of lockdown, you need a psychiatrist not Greggs. https://t.co/WTkYt1xeEt

“That rich Piers, coming from a man that sat in line for an hour to get a Mcdonald’s,” another pointed out.

“I don’t care how much they trigger you, @GreggsOfficial vegan sausage rolls are amazing,” another stated.

“If you’re still hating on vegan sausage rolls after all this time, you need a psychiatrist,” another told Piers.

“Not the sausage roll thing again, Piers. You’ve been doing so well!” another quipped.

Others accused Piers of working with Greggs to promote the brand.

“How many veggie sausage rolls are Greggs paying you to promote them?” asked one.

“I thought his contract with them would have run out by now. Guess they need a boost again now they’re opening up,” another joked.

Greggs announced details of its reopening on Twitter last night.

The tweet declared: “It’s official. Here’s over 800 reasons to be cheerful.”

It added: “Find out which shops are reopening near you tomorrow from 9am. Please be safe and remember the 2m rule.”

Head to our Facebook page @EntertainmentDailyFix and let us know if you’ve had your sausage roll yet.