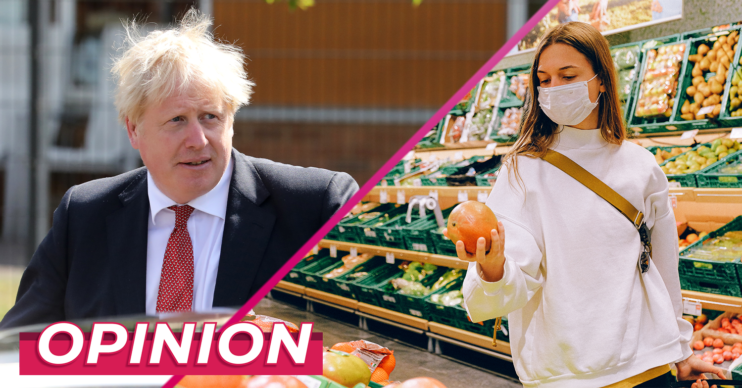 OPINION: Face masks are mandatory from tomorrow and the government should pay for them

We've lost enough money as a result of coronavirus

However, after months of furlough, redundancies, not to mention the impact the virus has had on the self-employed, should we really have to foot the bill for the masks ourselves?

I think the government should issue a handful of reusable face masks to each and every person who is required by law to wear one.

They could send, say, five to each person registered to vote.

Surely a bulk buy could be arranged at a discounted rate?

Read more: Jaffa Cake ice lollies exist and they have jelly in the middle

Rishi Sunak has announced a £10 off deal for eating out in August to get the economy back on track.

But what about our bank balances? We’re expected to spend, spend, spend to boost the economy and to protect our own health.

People are losing their jobs, yet the government wants us to spend more money, on something they say we have to have by law?

After all, would we even be in this position if the government had acted faster?

It’s been widely claimed that Britain locked down too late.

Face masks? What a fiasco!

Some even claimed the COVID-19 death toll would have been lower if we’d locked down even a week earlier than we did.

If you ask me, the government’s handling of the face mask fiasco is just another example of how Boris Johnson has handled the pandemic badly.

If masks are so important, why do we only have to wear them from tomorrow?

Why didn’t we have to wear them as soon as they realised – weeks after other nations, it seems – that face masks could help stop the spread of this horrendous virus that has claimed so many lives?

Our income has been affected enough in recent months.

People are losing their jobs, losing money by having their hours cut, yet the government wants us to spend more money, on something they say we have to have by law?

And if we don’t wear them then we’ll be expected to spend more money on their £100 fines.

Now, I am in no way against the use of face masks in an enclosed space.

Trust me, I’m as scared as the next person as catching coronavirus.

And I intend to do all I can to ensure I remain healthy.

All I’m saying is if the government insists we have to wear them, then they should supply them.