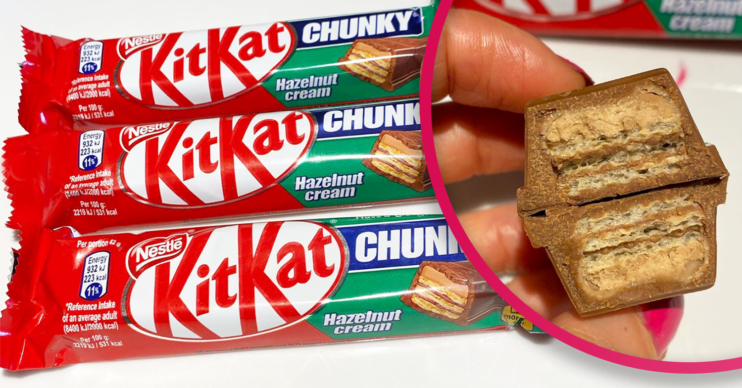 Another day, another new choccie find!

There’s good news for fans of Nestle’s KitKat Chunky – a new flavour has gone on sale in the UK.

And early testers say it tastes just like Nutella.

Some have even raved that the chocolate bar is “to die for”.

So, without further ado, let us introduce you to the new KitKat Chunky Hazelnut Cream.

It’s been spotted on sale by foodie blogger HelenJTea,

Posting a series of pictures and a video of the KitKat Chunky, Helen declared: “Love it!”

“If you love Nutella, you will love the Hazelnut Cream KitKat,” she said.

The chocoholic then went on to compare the product to an Australian version she’d had before.

“This had a much stronger hazelnut flavour than the Hazelnutty Kitkat I tried from Australia and the chocolate had a richer flavour,” she said.

They taste like Nutella. Definitely worth trying out if you never have before.

Helen’s followers were quick to comment on the food find.

“Can’t go wrong with a KitKat,” declared another.

The flavour has been on sale on these shores before, but as an import.

However, this time it’s being stocked in local corner shops, according to Helen.

She said she bought it from her local Londis last week.

The imported bars were previously on sale online, with customers on Amazon raving about the flavour.

“Man-oh-man, are these KitKats good!” declared one chocolate fan.

“Hazelnut KitKats are outrageous! In a good way!” said another.

“They taste like Nutella. Definitely worth trying out if you never have before,” the chocoholic continued.

“LOVE THEM!” another declared.

“The hazelnut flavour is to die for!” exclaimed another, who also had a serving suggestion.

“I highly recommend eating these while drinking coffee. The flavour is unbelievable,” they added.

So many new sweets!

The bars are the latest in a long line of new confectionary items that have been busily hitting UK shelves.

Chocoholics have been thrilled at the plethora of chocolate orange goodies on sale ahead of Christmas.

Many have even declared the new foodie launches have “saved 2020”.

We have to say, we might have to agree!