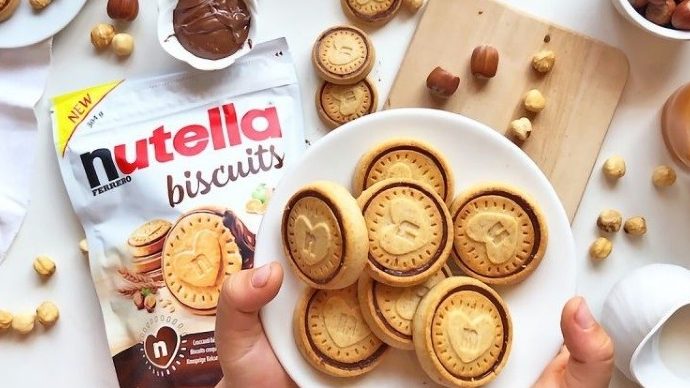 Ferrero’s best-selling Nutella Biscuits are now available to buy in the UK.

The biscuits launched in France last April and sales extended into Italy at the end of last year.

Now, however, you can get your hands on the 304g bags in the UK.

Here at ED! we’ve tried them in the name of research and can confirm they are entirely delicious.

A gorgeously gooey layer of Nutella is encased in a layer of crunchy biscuit that melts in the mouth.

The biscuits are also imprinted with a cute heart – and we are most definitely in love!

Great dunked in a cup of tea or eaten on their own, they are deliciously moreish.

Online retailer GB Gifts has the imported packets available for sale online for £8.99 plus postage and packing.

Each biscuit weighs around 14g and contain 71 calories.

“Very tasty,” said one Nutella Biscuit fan. “They need to be released officially in the UK.”

Another said: “OMG Nutella! Thank you for inventing this delight.”

Read more: Quality Street to launch a new range of chocolate truffles “into Asda next month”

“I soak them in milk,” came a top tip from another fan.

To celebrate the upcoming pre-Easter feast, supermarket Morrisons has huge tubs of the chocolate hazelnut spread on offer at the moment.

The offer is valid until Pancake Day on February 25, so it could well be time to stock up if you’re a fan!

OMG Nutella! Thank you for inventing this delight.

In other Nutella news, the spread has its own national day, with February 5 being named World Nutella Day, where we get to celebrate all things chocolate and hazelnut!

We bet it was celebrated in style at the two Nutella Cafes in the States.

The original branch opened in Chicago in 2017, with a New York outpost following shortly after.

The votes are in and you chose a Nutella breakfast with pancakes and strawberries! Stay tuned throughout the day to continue celebrating with us! #WorldNutellaDay⁣ .⁣⁣ .⁣⁣ .⁣⁣ #Nutella #WorldNutellaDay2020 #NutellaLovers #Breakfast #BreakfastLover #Brunch #BrunchLover #WeekendBreakfast #NutellaBreakfast

Menu items include several brunch and dessert options, from chocolate crepes and espresso drinks to Nutella-flavored ice cream and shakes.

Head to our Facebook page @EntertainmentDailyFix and let us know if you’ll be trying the Nutella Biscuits.