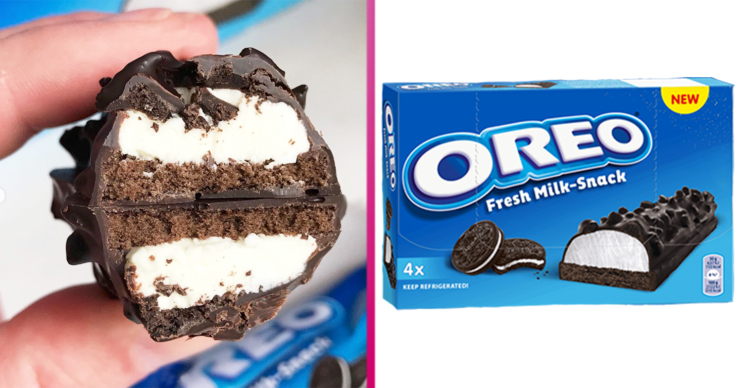 Chocolate, cake or biscuits? Or ALL THREE IN ONE CAKE BAR!

Chocolate, biscuits or cake? It’s a conundrum that we seem to face so often.

So it’s handy the good people at Poundland are here to help with the store’s latest launch.

It combines the best of all things sweet by combining chocolate, biscuits and cake in a bar.

Without further ado, let us introduce you to the new Oreo cake bar.

It’s called the Oreo Fresh Milk-Snack and it appears to have first launched in Austria before making its way to Blighty.

“It is the most exciting fusion in chilled milk snacks,” says the blurb.

“The coating with real Oreo cookie chunks makes the Oreo Fresh Milk-Snack cookie-crunchy but with its fluffy signature Oreo Vanilla-Cream it is also creamy-fresh!”

The Oreo cake bar is made from real fresh milk and, as such, needs to be kept in the fridge.

Which we think makes it the perfect cooling snack as the sun shines.

The launch was revealed by Instagram foodie Kev’s Snack Reviews.

“It all sounds very intensely Oreo doesn’t it?” he added.

However, it also appears to be oozing with chocolate, with Kev reporting it’s a “bit too cocoa-dominated for my liking”.

If you’re in the mood for something very cocoa-rich, you’ll probably enjoy these!

No such thing in our books!

He concluded: “If you’re in the mood for something very cocoa-rich, you’ll probably enjoy these!”

His chocoholic followers clearly weren’t put off by the super-chocolatey snack, though.

“Very intrigued by these,” said one.

“Not a massive fan of Oreos but this looks interesting,” another said.

“These look so good (we all know I’m an Oreo addict)!” another declared.

“Oohhhh put them in the freezer,” said another who clearly fancies a frozen Oreo cake bar.

“Got a Poundland nearby?” asked another, tagging a friend.

You can pick up the box of four in store now for, you guessed it, £1.

And, while you’re there, since face masks are becoming mandatory in shops later this week, pick yourself up a face covering too.

The store’s Pep & Co range is selling packs of three reusable masks for £5.

They come in lots of pretty patterns, including florals.

There’s even a unicorn print to encourage kids to wear them.

Let us know if you’ll be popping to Poundland on our Facebook page @EntertainmentDailyFix.