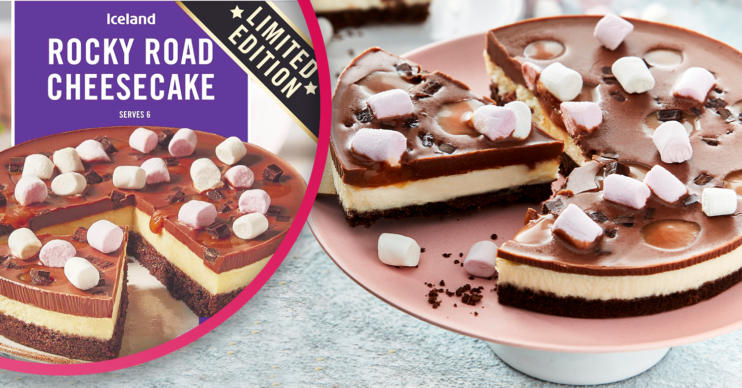 It's in store and online NOW!

Announcing the news of the launch on Instagram, Iceland shared a gooey, chocolatey picture of the dessert that had us drooling.

The shot features the Iceland Rocky Road Cheesecake being sliced up to share.

Although we’re not sure we’re entirely down with that – it just looks too darn good!

“Let us take you on a journey with our Rocky Road Cheesecake,” the post said, adding the love heart eye emoji.⁠

It added: “The chocolate flavour biscuit base offers texture and crunch, while the creamy cheesecake melts in the mouth.”

And, perhaps stating the obvious, it concluded: “Designed to be devoured.”

Early testers seemed to agree, with one calling the dessert “excellent”.

The cheesecake serves six and weighs in at 445g.

The chocolate flavour biscuit base offers texture and crunch, while the creamy cheesecake melts in the mouth.

It costs £1.75 and needs to defrost at room temperature for two hours and 30 minutes before serving.

Each slice – one sixth of the cheesecake – contains 279 calories.

Another added: “Oh I love cheesecake and chocolate.”

A third said they’d tried it and confirmed it was “really nice”.

Some said it was too sweet, while others declared that it didn’t contain enough sweets!

Posting on the Iceland website, one reviewer confirmed it was tasty.

They said: “It was delicious and tasty – very creamy.”

They added: “My only disappointment was there weren’t a lot of marshmallows on the top.”

Another said: “Reasonable for the price but found it overly sweet.”

Perhaps the Iceland shoppers should get together and perform a marshmallow swap, then everyone would be happy!

You can pick up the Iceland Rocky Road Cheesecake in store and online now.

Catch it while you can, though, the dessert is a limited edition.