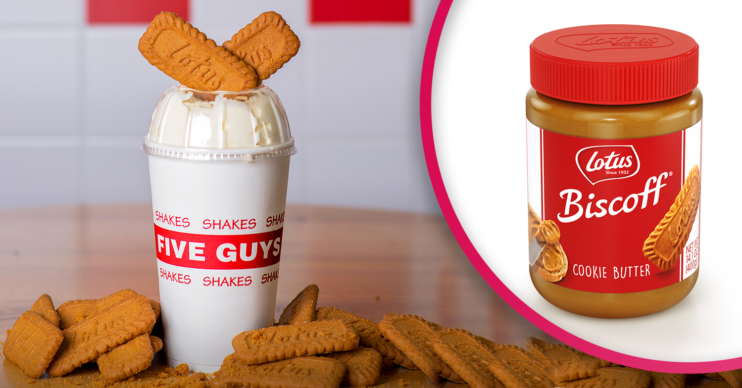 Biscoff fans listen up, because a piece of deliciously joyous milkshake news has reached us here at ED! HQ.

A creamy new Lotus Biscoff product has launched and it’s sure to bring all the boys to the yard.

Yes, it’s time to channel your inner Kelis and get yourself down to your nearest Five Guys.

Because the burger chain has launched a Lotus Biscoff milkshake.

Could life get any better? We don’t think so!

Posting a picture of the milkshake, Lotus revealed: “That’s right, there’s a new #LotusBiscoff Shake mix-in on the block at @fiveguysuk! How could anyone resist something THIS delicious…? Asking for a friend!”

They added: “Starting with a premium shake that was specially formulated for Five Guys, the creamy, dense texture is complimented with an authentic vanilla flavour and blended with the new Lotus Biscoff mix-in to create an irresistible milkshake.”

Five Guys currently has 11 of the mix-ins, which diners can add to the basic milkshake to make a bespoke flavour of their own.

‘I need that in my life’

However, fans of the Lotus caramelised biscuit only have eyes for one.

“I need that in my life,” said one soon-to-be fan on the Instagram announcement.

“We should go today!” said another, tagging their pal.

“Between this and their fries, I don’t think I need to eat anything else ever again!” declared another.

“OMG I need to try this ASAP!” another commented.

Where and when can I try it?

Well, if you feel the same, the new Biscoff milkshake is in store now.