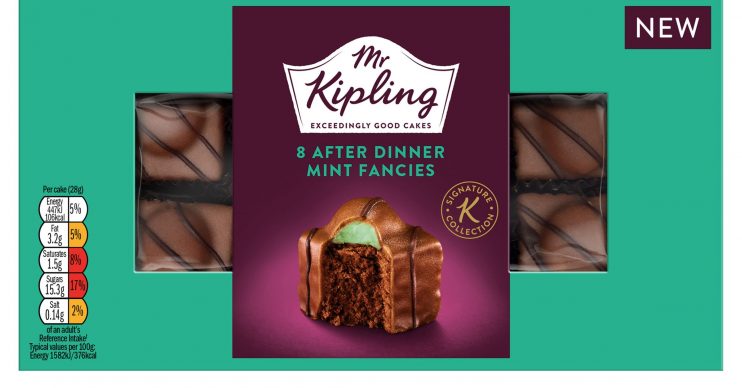 We won't be waiting till 8pm to eat these…

If, like us, you’re a fan of cakes and After Eight chocolates but feel greedy scoffing both, then we have some very good news for you.

The good people at Mr Kipling have combined the two into its delicious French Fancies.

With premium ingredients, richer textures, fuller tastes and indulgent flavour combinations, the range is sure to delight your taste buds and have you longing for “just one more”, said the blurb.

They’re on sale in all good supermarkets now and a box of, ahem, eight costs just £2.50.

A little more substantial and even more tasty than the traditional after-dinner chocolate thins, each dainty cake contains 106 calories.

Would it be acceptable to skip dinner and just indulge in the cakes, we wonder?

Another tweeted their friend and said: “You NEED to try the Mr Kipling After Eight Mint Fancies.”

However, in news that shocked us, the cakes were actually launched back in September, so we’re not entirely sure how they’re escaped our beady greedy eye since then!

These really don’t disappoint😋NEW @Morrisons pick these Mr Kipling After Dinner Mint Fancies up for £1.50😉 pic.twitter.com/10PED6mcCB

If you’re looking forward to Easter, Mr Kipling also has some seasonal Fancies in supermarkets now.

We can confirm we’ve tried the Egg Fancies and they are delicious.

You NEED to try the Mr Kipling After Eight Mint Fancies.

When you bite into them, the cakes look as though they have a little fried egg on top!

French Fancy fans can also tuck into the new Lemon Fancy this spring.

There’s a cute Easter bunny on the box plus the cakes are covered in a citrussy lemon flavour fondant icing.

The lemon-flavoured and egg-themed cakes are both on offer for £1.50 in stores such as Tesco and Iceland now.

Head to our Facebook page @EntertainmentDailyFix and let us know what you’ll be trying!