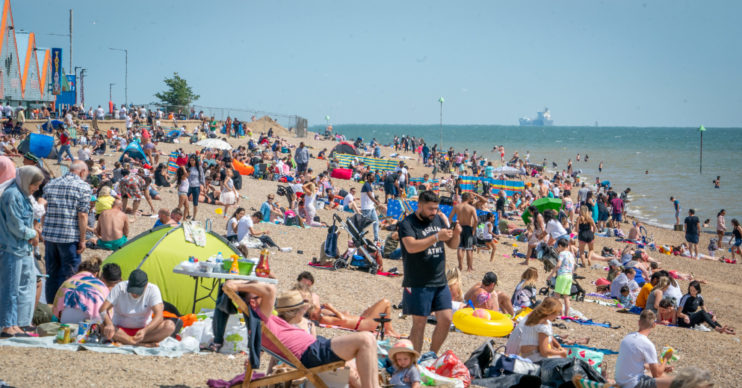 With sunnier weather set to return to many parts of the country next week, MPs are warning that beaches could be forced to close.

It comes after thousands of Brits flocked to the beach to enjoy the recent warm weather.

With so many people on the beach, social distancing appeared nigh-on impossible.

As as result, it’s now feared beaches could be closed if the crowds spark a second wave of coronavirus.

Read more: The doughnut sandwich exists and you can get it delivered to your door

MPs are now warning Brits to stay away from the country’s beaches.

Crowds flocked to Bournemouth, Brighton and beaches on the south-west coast.

Public Health England has since confirmed that the “R” rate of infection has increased to above one in parts of the UK – including the south west.

Brighton Pavilion MP Caroline Lucas said: “Local businesses in Brighton are already suffering hugely from this crisis. It would be a disaster for them if strict lockdown measures had to be re-imposed locally because of a rising infection rate partly brought about by thousands of visitors.”

She added: “To visitors who love coming to Brighton, we love having you. But I’m asking you now – please, stay away until the city is ready to welcome you.”

South East Cornwall MP Sheryll Murray added: “We see waves at the beach but the wave I do not want to see is a second virus wave caused by too many people coming to our coastline.”

The wave I do not want to see is a second virus wave caused by too many people coming to our coastline.

He said: “Clearly if too many people visit our beaches and behave in an irresponsible way then we do run the risk of the government taking steps to restrict access to our beaches.”

Health Secretary Matt Hancock previously warned that local lockdowns are possible if the R rate rises in a certain area.

The government also hasn’t ruled out a return to full lockdown if there are fears of a second wave.