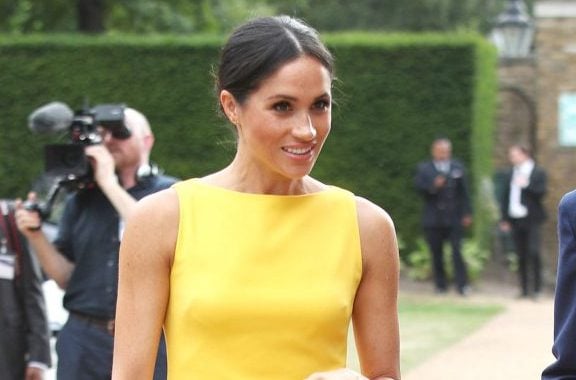 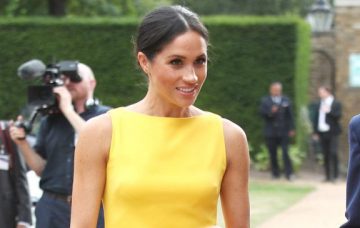 Meghan, The Duchess of Sussex wore a bold yellow dress on her latest outing with husband Harry, The Duke of Sussex.

There were a multitude of stories over the last week that Harry, 33, and his new wife Meghan, 36, were toning down their affectionate gestures in public after they chose not to hold hands at a recent event.

But they looked as close as always as they held hands arriving for the Your Commonwealth Youth Challenge at Marlborough House.

In a bold move, Meghan switched up her style, ditching her recent string of nude and pale coloured outfits in favour of a vibrant yellow dress.

The sleeveless frock was by designer Brandon Maxwell who has served as Lady Gaga’s fashion director!

It’s the first time Meghan has worn a bright colour on an engagement with Harry since their marriage in May.

She wore nude and pale coloured outfits to Trooping The Colour, Ascot and her Cheshire engagements with the Queen, however, there could be a good reason for that.

An expert has suggested Meghan may choose less eye-catching colours to avoid distracting attention from The Queen.

Fashion expert Lucas Armitage told Daily Mail: “I feel this is a clever styling tactic as it will always work with the Queen’s look; she is known and applauded for her use of bright fun colours.”

Meanwhile, it’s also been suggested the only reason Harry and Meghan didn’t hold hand at their latest engagement was because The Queen was in attendance.

They joined Her Majesty at Queen’s Young Leaders Reception at Buckingham Palace at the end of June.

It’s been suggested that because The Queen and Duke of Edinburgh refrain from holding hands in public, the other royal couples follow suit when they are around them.

Harry and Meghan met youths at the event to learn how they’re trying to develop ideas for what the Commonwealth should represent by 2040.

In a speech at the event, Harry said: “Meghan and I are incredibly excited to meet so many of you representing the future of the Commonwealth.

“We can’t wait to see you in action in your home countries and learn about what you’re doing to better the Commonwealth, and the world, in 2040 and beyond.”

"As the youth of today, you should play a part in shaping the policies which will make the future better for everyone." — The Duke of Sussex, #CommonwealthYouth Ambassador, to young @CommonwealthSec leaders pic.twitter.com/fxLF2H0fV1

Next up, Harry and Meghan will travel to Dublin on July 10 and 11 at the request of Her Majesty’s Government.

Harry and Meghan then attended their first Royal Ascot as a married couple in June. 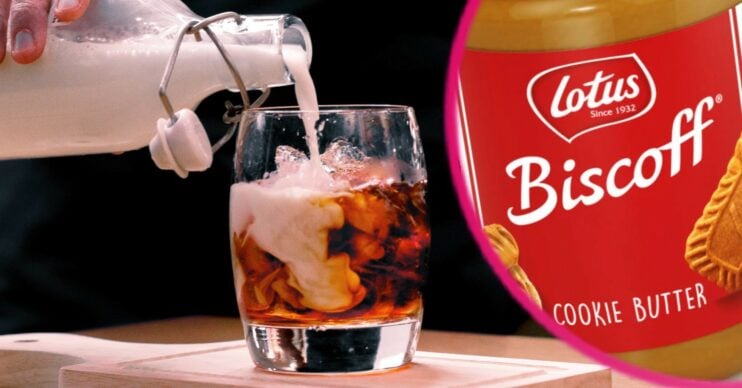 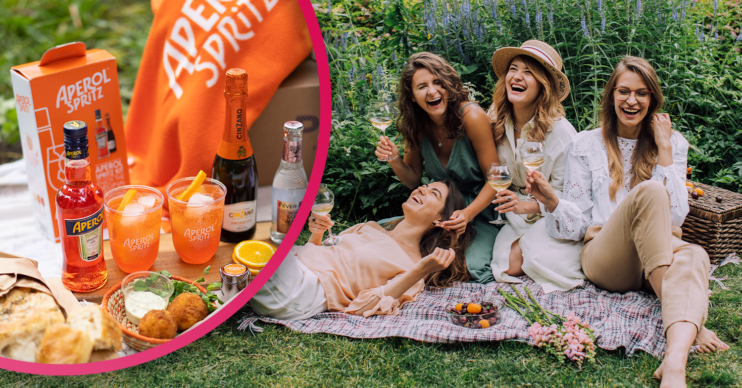