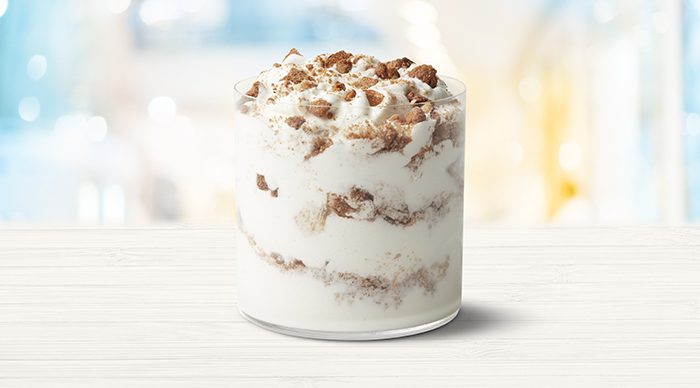 It's available via Uber Eats now!

Step aside mince pies and Christmas pud, there’s only one dessert we want on December 25 and that’s McDonald’s new Snickerdoodle McFlurry.

Billed as a “creamy, sweet treat perfect for the holiday season”, McDonald’s say the Snickerdoodle McFlurry “is made with creamy vanilla soft serve with Snickerdoodle topping mixed throughout”.

For those not in the know, Snickerdoodle is a type of cookie that’s full of the flavours of the festive season because it’s rolled in cinnamon sugar.

However, if you have the Uber Eats app, you don’t need to wait for the McFlurry to launch in store, as you can get your hands on it right now.

It’s available via McDelivery until November 17.

“Whether you’re curled up by the fire, putting up decorations or online gift shopping, we’ll deliver festive deliciousness right to your doorstep,” a spokesperson said.

Read more: The Queen’s former press secretary slams The Crown for “suggesting the monarch had an affair”

Those without the app will have to wait until the treat hits Golden Arches nationwide later this month.

McDonald’s is adding Snickerdoodle McFlurry to its menu for the holidays!!! Take alllll my money!!!

It’s the restaurant’s first seasonal McFlurry launch since 2012 – and fans couldn’t be happier.

a snickerdoodle mcflurry?????? a need, not a want

MCDONALDS IS ADDING SNICKERDOODLE MCFLURRY TO THEIR MENU FOR THE HOLIDAYS!!! TAKE ALLLLL MY MONEY

McDonald’s recently announced that this Christmas will also see the return of the Cool Mint Matchmakers McFlurry.

There’s also a range of festive coffees and the delicious Millionaire’s Donut – an indulgent iced caramel doughnut with gooey caramel filling, topped with biscuit pieces and a dark cocoa drizzle.

Will you be trying the new McFlurry flavour? Let us know on our Facebook page @EntertainmentDailyFix.