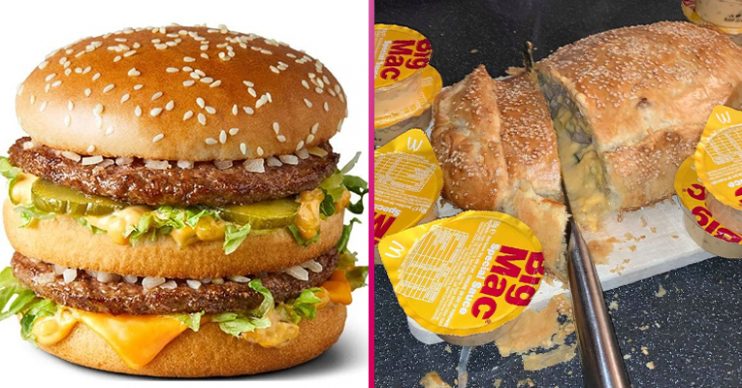 McDonald’s fan creates a Big Mac beef Wellington filled with the burger’s trademark sauce and we are drooling!

While most people have been dipping their nuggets and chips into the pots of McDonald’s Big Mac Special Sauce that recently went on sale, one woman has come up with a rather different use for hers.

She has used them to create a “Big Mac beef Wellington” – and to say the internet is divided would be an understatement.

Keen cook Georgia Stapleton told ED! she came up with the idea because she “loves” Big Macs and pastry and thought she’d combine the two.

She said: “I got the idea because I love Big Macs and love a bit of pastry.”

She added she’d seen that McDonald’s were selling the limited-edition Big Mac sauces, so she bought 10.

Georgia was also keen to tell us her secret recipe, which has thrilled us no end as we’re drooling and we can’t wait to recreate it.

She revealed: “I bought 10 of them, whacked cheese inside some mince beef, then covered the puff pastry with onion, gherkins and more cheese, then shoved it in the oven for 40 minutes.”

She uploaded the pictures to the Rate My Plate Facebook group – and opinion was most definitely divided.

One said: “Don’t even like Big Macs but that bad boy is a goer!!”

Another added: “That looks a tad fit does that.”

“My childhood fantasy,” admitted another.

Others admitted that while they didn’t think it looked immediately appealing, they would give it a go regardless.

Don’t even like Big Macs but that bad boy is a goer!

“Sounds revolting, looks awful, however, would love to give it a go,” one follower said.

Another asked: “I don’t know what to make of this! Looks vile, but I’m curious. Was it good??”

However, not everyone was convinced.

“This doesn’t need to exist,” said one group member.

Another added: “That looks so disgusting. I can barely put into words how bad it is.”

Others seemed to think Georgia had all the makings of a fast-food queen, though – and even suggested she should sell the creation.

“You need to do drive-through,” said one fan.

Let us know if you do decide to open one, Georgia, as we’ll be first in line!