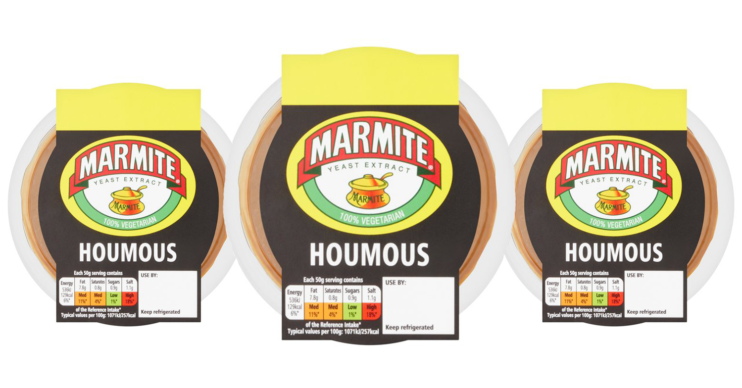 Marmite HUMMUS is on sale at Tesco and shoppers are disgusted

It's been branded a "sick joke" by haters

They say you either love it or hate it and Brits have most definitely made their minds up about Marmite’s latest launch – Marmite hummus.

Yes, such a “delicacy” exists and the foodie jury is in…

“I second that statement in it’s entirety,” said another.

“Just because you can doesn’t mean you should,” another stated.

“Don’t we have enough to contend with at the moment,” said another, adding the green vomit emoji.

No… Just no… Stop this abomination!”

“That’s an insult!” said another.

The offending item is on sale in Tesco now.

Don’t we have enough to contend with at the moment

It’s thought the idea might have come about after a Marmite fan posted a picture on Twitter of what he called the “lunch of the gods”.

The picture showed two pieces of toast spread with hummus and Marmite.

The spread’s official account reposted the picture and said: “Marmite and hummus anyone?”

While the recipe idea didn’t exactly get rave reviews on Twitter, that didn’t stop Marmite going and creating the product.

“No… Just no… Stop this abomination!” screamed one hater online.

“Haven’t we already gone through enough hardship this year???” said another.

“No. No. A thousand times no,” another tweeted.

“Please tell me that this is no more then a sick joke and the honourable name of Marmite isn’t really to be infected with hummus,” slammed another.

“The thought of it makes me want to throw up,” said another.

The lovers hit back

However, some were on board with the idea.

The Marmite combinations are flooding in. Marmite and hummus anyone? #TuesdayThoughts https://t.co/CdPOg7iClO

“I love both Marmite and hummus. This is the pairing of my dreams,” said one lover.

“That actually sounds delicious! The salty goodness of Marmite with the nutty creaminess of hummus!” drooled another.

Will you be trying it? Head to our Facebook page @EntertainmentDailyFix and tell us your thoughts.