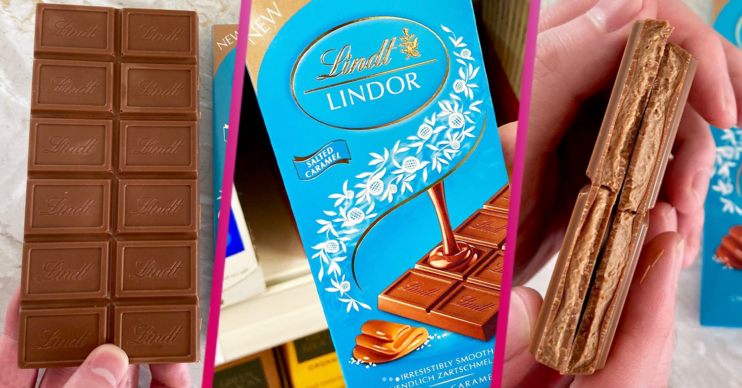 Hot on the heels of the Salted Caramel Truffles…

We’ve got brilliant news for fans of Lindt chocolate and, quite frankly, that means everyone!

The brand has launched a “super delicious” new bar that’s got Brits drooling.

Yes, it appears Lindt has decided to capitalise on the success of its Salted Caramel Truffles and launch the flavour in bar form.

And our favourite foodie blogger NewFoodsUK shared the news.

Alongside three scrumptious-looking pictures of the bar, the post revealed it costs £2 and you can get it at Sainsbury’s now.

“This bar is super delicious,” it continued.

“It has that classic Lindor taste, with the addition of salted caramel!”

The post went onto explain the bar features the “right amount of salt crystals throughout”.

It concluded: “We love this bar!”

It has that classic Lindor taste, with the addition of salted caramel!

After one look at the comments, it appears fellow early testers agree.

“Those bars are tasty!” said another.

“I literally ate some of this about an hour ago! So nice,” confirmed another.

The gushing endorsements were clearly enough to send others scrambling to the shops to stock up.

“I know what I’m getting on my way home tonight!” declared one.

“Ooh need a trip to Sainsbury’s,” said another.

It’s safe to say many others would be putting the bar on their weekly shopping list.

“Oh my god! Someone find me this please!” pleaded one fan.

“This looks amazing!” declared another fan.

“Mmmm this looks so good,” said another.

Others seemed thrilled Lindt had launched a bar version of its popular truffles.

“We can get bars of it!” said another, tagging their friend.

“OMG,” came the reply, accompanied by the drooling emoji.

“Truffles or the bar?” another asked her pal.

Before waiting for their reply, she continued: “Let’s order both!”

That Lindt fan could just be onto something…