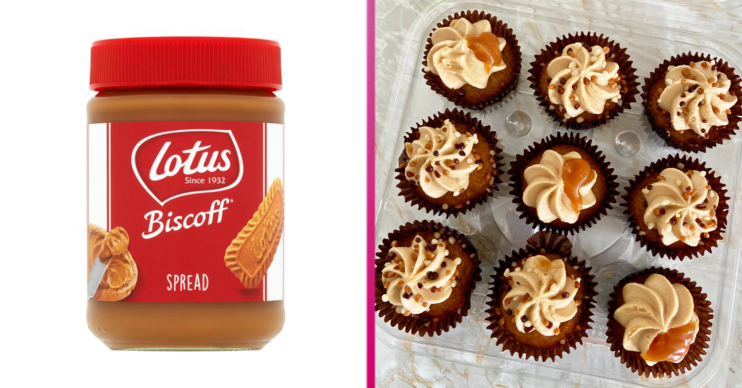 Limited-edition Biscoff cupcakes have gone on sale at Asda.

And not only are they delicious, they’re also purse-friendly, too.

The food blogger posted a series of pictures of the cupcakes, which come in a box of nine.

Commenting on the taste, it continued: “The topping tastes just like biscuit spread/Biscoff!”

Read more: Woman slammed for revealing she won’t wear a face mask when they become mandatory in shops

Complementing the supermarket on the cakey creation, it concluded: “Great addition Asda!”

Toffee sponge with a Biscoff buttercream

They appear to be decorated with a drizzle of either Biscoff or toffee sauce.

Others are decorated with milk, white and dark chocolate flecks.

“They look amazing!” said another.

“Gyms aren’t open for another two weeks. I’ll try these then!” another laughed.

However, you might be forgiven for not spotting the cupcakes on the shelves of the supermarket as they’re actually labelled as Speculoos Cupcakes.

Speculoos is the generic name for a type of Belgian spiced shortcrust biscuit.

“Their real name!” said another.

They won’t break the bank either

“So cheap!” said another.

“They look like the Thorntons ones but £4 cheaper,” said another.

“I’ve tried the Thorntons ones, these Asda ones are better,” said New Foods.

“Oh god don’t tell me that, I’ll have buy a pack now!” said the cupcake fan.

They appear to be talking about the Thorntons Cupcake Creations, which are on sale in Sainsbury’s for £8.

Where can I buy the Biscoff cupcakes?

The truly scrumptious Biscoff cupcakes are on sale in Asda now.

They’re priced at just £2 for a box of nine.

However, as the packet suggests, they are limited edition.

So you’ll have to be quick if you want to get your Biscoff fix!