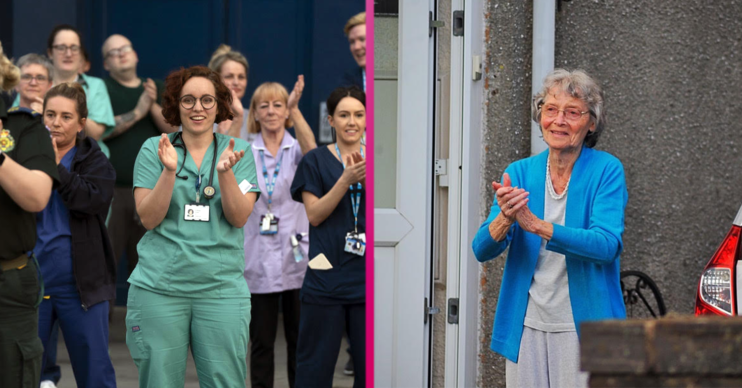 It happens every Thursday at 8pm

Every Thursday night at 8pm the nation comes together to Clap For Our Carers.

Everyone from the Duke and Duchess of Cambridge to Katie Price take part to pay tribute the NHS and the nation’s key workers.

However, this week, things look set to be a little different for the residents of one quiet cul-de-sac in leafy Surrey.

They have been told to keep the noise down by the local council after it received just one complaint about the noise.

Lead by Heathrow worker Perry Clark, residents of the street in Ashford have been clapping while singing along to You’ll Never Walk Alone – by Gerry and the Pacemakers and the Colonel Tom Moore version – and Dame Vera Lynn’s We’ll Meet Again.

The tunes are played through a loudspeaker.

However, the residents claim they have now received a letter from the council telling them to quieten down.

Mr Clark claimed Spelthorne Borough Council sent him a letter asking him to “deal with the loud music”.

He told The Sun: “It’s a real slap in the face. I’ve used my speaker since the start of all this and everyone here loves it. We just want a good time.”

He added: “We stand outside and have a singalong as a community for less than half an hour. It means a lot to people during the crisis.”

One neighbour, Gillian West, said the complaint is a “ridiculous thing to do”.

I’ve used my speaker since the start of all this and everyone here loves it. We just want a good time.

She added: “We’re not having parties or anything. We’re doing the same as everyone else in the country by showing our support. For the council to say to keep it down is wrong.”

However, the council maintained that the complaint doesn’t relate to Clap For Our Carers.

It said that the complaint was about “ongoing noise issues”.

The council also said the letter Mr Clark received was only to notify him a that complaint had been made.

The residents of the cul-de-sac were met with a wave of support online.

One Facebook user said: “I was always under the impression that as long as its before 11pm and or it’s not creating a massive amount of disruption it’s ok?! It was three songs and at 8pm! And once a week. I am sure anyone can live with that.”

Will you be clapping for our carers this week? Tell us on our Facebook page @EntertainmentDailyFix.