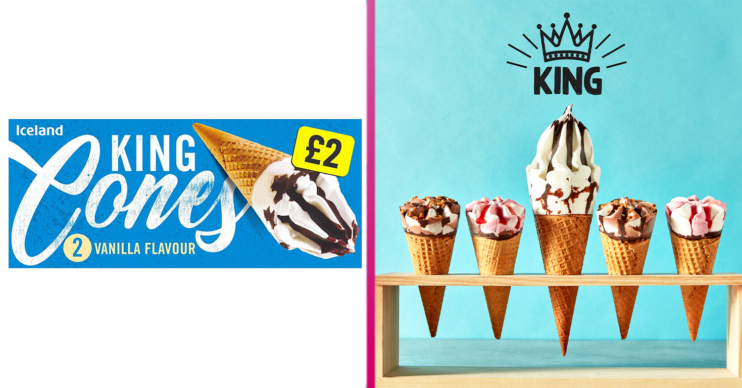 It's in store and online now!

Frozen food giant Iceland has launches a new ice cream cone and boy is it a whopper!

If, like us, one Cornetto is never enough, then Iceland has the solution for that.

Introducing the King Cone – an ice cream that’s sure to settle even the strongest ice cream cravings.

And, what’s more, it’s double the size of any other Cornetto-style cone that Iceland sells.

“Iceland is upping the ice cream game this summer with gigantic King Cones that offer shoppers more than a scoop as the temperatures soar,” said a rep.

“Double the size of Iceland’s regular cones, these larger than life ice creams are just £2 for two, making them a treat for the family and the finances all summer long,” they added.

“More than double a regular one!”

“Watch as the kids (and big kids) gawk at the size of these giant cones – there’s no way anyone’s eating these without a massive smile on their face,” the rep concluded.

The cones weigh in at 260g each and early testers have said they have struggled to finish the cone in one sitting.

They clearly have a smaller appetite than us…!

“The size of these is more than double a regular cone!” their review started.

“It was hard for me to eat all at once, but my boyfriend ate it within five minutes,” she added.

She also had a flavour request for the store.

“I would LOVE mint/choc version of these cones,” she said.

So would we, so we hope the store is listening!

The cone has a chocolate coating and the whole thing is topped with lashings of chocolate sauce and chocolate shavings.

I never feel like one is enough, prayers have been answered!

“I never feel like one is enough, prayers have been answered!” said one fan.
“Other half snaffled both and asked for more,” said another.

“They are enormous,” she added. “He says they taste like Cornish ice cream.”

Iceland has also launched another new addition to its ice cream range.

And, although this one isn’t as much of a whopper in terms of size, it packs a powerful flavour punch.

They feature soft, whipped vanilla ice cream topped with swirls of strawberry sauce and a multi-coloured rainbow of sprinkles for the “quintessential birthday cake experience”.

They’re limited edition though, so be quick if you want to try them!

You can order both ice cream treats in your online shopping now or pick them up from your local Iceland.

Tell us which you’ll be trying on our Facebook page @EntertainmentDailyFix.