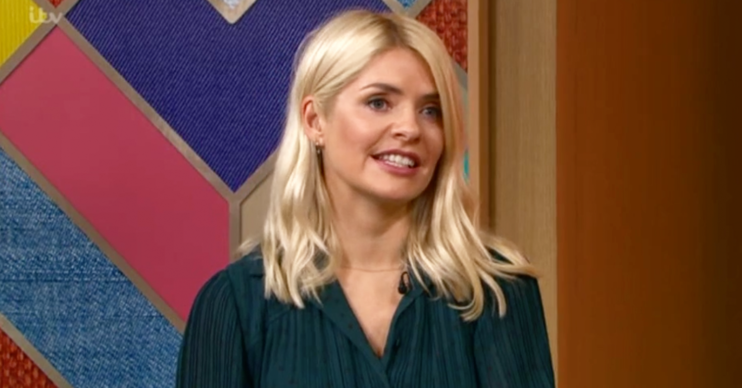 Was it blue or green?!

Holly Willoughby sparked a huge debate as she wore another rented dress to front today’s This Morning (October 13).

Taking to Instagram ahead of going live at 10am, Holly revealed what she was wearing.

She said: “Morning Tuesday… Once again we are doing dress rental in our fashion item today… this green dream is also only mine for a while… if it’s good enough for Cinderella!”

Holly then revealed that she had rented the Rotate Birger Christensen dress from Hurr Collective.

“This is gorgeous! Although it’s definitely not green,” said one.

“I thought this! It’s teal surely? Beautiful though,” said another.

Read more: Cerys Matthews ‘had a good time’ on I’m A Celeb despite controversial romance

“It is dark teal,” another stated.

“That’s blue – unless I have lost my colour vision overnight?” another commented.

That’s blue – unless I have lost my colour vision overnight?

“I was thinking that too,” another of Holly’s followers agreed.

Another turned on the TV and had a look at the dress there.

“On the TV it is in fact green…. a magical gorgeous dress!” the viewer exclaimed.

‘I thought it was navy blue’

“Dress does look nice,” another confirmed. “But the colour looks like teal to me.”

“You look great, but it looks more teal than actual green,” said another.

“I thought the dress was navy blue!” said another.

“Holly, your dress looks BLUE not green! Or am I seeing things?” another asked.

“It’s blue not green,” said another.

Read more: Take part in our reader survey and you could win a £250 Amazon voucher

However, we can in fact confirm that the dress is in fact a shade called deep teal.

And, according to Wikipedia, teal is a “blue-green colour”.

“Teal is a blue-green colour,” the entry reads.

“Its name comes from that of a bird – the common teal – which presents a similarly coloured stripe on its head.”

The designer’s website added it is a “long dress made of green pleated chiffon with polka dots”.

We’re still none the wiser!

The dress wasn’t to everyone’s taste

Regardless of colour, the dress did have some haters who posted comments on Holly’s post.

“Dress not up to your normal level – must do better,” instructed one.

“I have liked every dress you have worn but sadly not this one. It doesn’t look right on you and you don’t look happy in it,” commented another.

If you want to steal her style, they’re from Reiss and cost a pricey £350!

The dress, meanwhile, costs around £300 if you want to buy it.