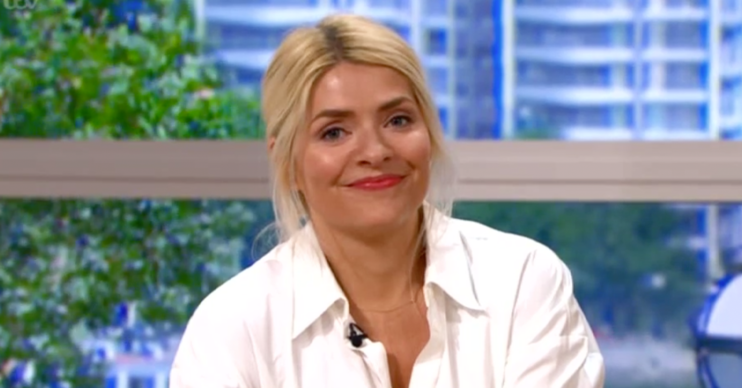 The viewers agreed with him, too!

ITV’s Holly Willoughby and Phillip Schofield were in a playful mood as they presented This Morning today (July 9).

The show – the penultimate one they’ll present ahead of their upcoming summer break – started with a jovial an end-of-term vibe.

And the duo, who are the best of friends, opened the show joking about their outfits.

Holly’s look particularly came under scrutiny from her co-host.

She wore a gorgeous white shirt dress by Tory Burch.

Phil, meanwhile, added a bright pop of colour in his bold blue shirt.

Paying tribute to the NHS

“Today we have come as the NHS,” he quipped at the top of the show.

“Because we have come in NHS colours?” asked Holly.

I saw Holly walking down the corridor and I said: ‘You look like a nurse, a very glamorous nurse.’

Phil then explained what he thought the first time he saw Holly in her white dress.

“I saw Holly walking down the corridor and I said: ‘You look like a nurse, a very glamorous nurse,'” Phil revealed.

“Well here I am reporting for duty,” blonde Holly replied.

Phil then explained what goes on behind the scenes as the pair prepare for the day’s show.

He said after seeing what Holly’s wearing, he goes and picks “what I think might go with Holly’s clothes”.

She then teased her co-host and laughed as she explained that pairing something with a plain white dress doesn’t pose much of a styling challenge for Phil.

Morning Thursday… see you on @thismorning at 10am 🤍. Dress by @toryburch 🕊

“Oh Florence.… you spoil us!” said one, comparing her to Florence Nightingale, the founder of modern nursing.

“A very glamorous nurse,” said another.

Over on Twitter, one Holly fan appeared to be drooling as he posted a meme about the star’s outfit choice.

@Schofe @hollywills Me when Phil said, “Holly looks like a glamourous nurse”. pic.twitter.com/kH7Sf2PURu

And, if you take a little look at the white coats doctors and nurses wear, Phil and the viewers do kind of have a point…

Others likened Holly to another blonde bombshell.

One said she reminded them of iconic film star Marilyn Monroe, who wore a white dress in the famous scene from the movie The Seven Year Itch.

Others wished Holly and Phil a very well-deserved break away from the This Morning cameras.

Unusually for a Friday, the duo will actually be on screen tomorrow (July 10) presenting one final show before their break.

Head to our Facebook page @EntertainmentDailyFix and let us know what you thought of Holly’s outfit.