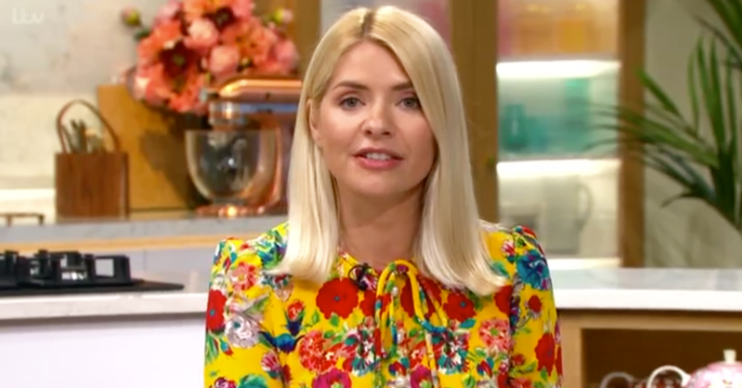 Before she went on air, Holly uploaded her daily #HWstyle shot.

She revealed she was wearing a yellow floral dress costing £221.25 by LK Bennett.

The brand is a favourite of the Duchess of Cambridge.

Many commented on the summery hue of the dress.

“Loving the longer hair,” said one.

What happened to your feet?

With Britain in the grip of a heatwave, others commented on the fact that Holly has clearly caught the sun.

And some eagle-eyed fans even claimed that something a little strange was going on with the This Morning star’s feet.

“Have you perhaps been wearing flip flops?” asked one.

If you take a closer look at Holly’s selfie, you’ll see that her legs look pretty tanned.

Her feet, however, appear a few shades lighter.

Morning Wednesday… it’s going to be a scorcher! ☀️ 🌴🌊 See you on @thismorning at 10am. Dress by @lkbennettlondon 💛

“You’ve missed your toes,” said another, referring to what could have been a fake tan fail.

“Need some colour on those toes,” said another.

“What happened to your feet?” another asked.

Holly has said previously that she isn’t a fake tan fan, but she does use leg make-up when she wears a skirt on the show.

Speaking on This Morning, Holly’s glow was previously pointed out.

She said: “This is a leg make-up which, to be honest, I will never wear in real-life but is more for the telly.”

Holly added: “Everybody thinks I wear fake tan and I hate fake tan. I have never been able to get on with it. I’ve probably had three fake tans in my whole life.”

Instead, the presenter wears leg make-up to even out her skin tone.

Although it appears she forgot to do her toes today!

She said: “If I’m wearing a skirt on This Morning, sometimes I put a bit on my legs just to even the tone out a little bit.”

On the subject of feet, Holly’s shoes also seemed to be a bone of contention among her fans.

“Not those heels again,” moaned one.

“Nice dress, change the shoes. You wear them every day,” said another.