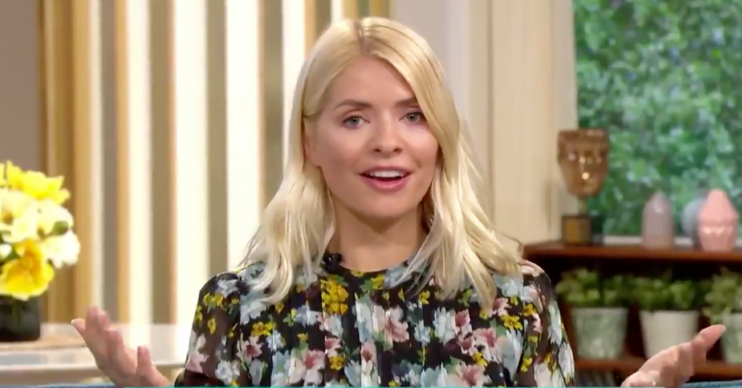 But some called out her annoying habit…

TV’s Holly Willoughby has been hailed as an “inspiration” by fans of This Morning.

The comments came after Holly uploaded her daily #HWstyle shot to Instagram.

In stark contrast to her usually expensive outfits, the bubbly blonde revealed she was wearing something of a bargain today.

On Wednesday’s show (June 17), Holly wore a black floral print blouse by Mango that’s currently in the sale for £19.99.

Her trousers were by the Duchess of Cambridge‘s favourite designer, LK Bennett.

Read more: Boris Johnson tells parents it is safe for kids to go back to school

However, it was the blouse that caught viewers’ eyes.

“Love this top!” said one fan.

Holly, you really are an inspiration to all of us.

“Just been on the Mango website and ordered one for myself which I will wear on my official first day back at work from furlough,” she added.

The woman concluded: “Thank you for the inspiration.”

Be quick if you want the blouse

“Holly, you really are an inspiration to all of us,” said another.

You’ll have to be quick if you want to snap up Holly’s blouse.

You might be able to pick one up if you’re braving the shops though, with high streets up and down England reopening.

Wednesday!!!! 💥… see you at 10am on @thismorning Trousers by @lkbennettlondon Top by @mango 💕

However, not everyone was impressed with Holly’s upload.

Since lockdown began back in March, the presenter has changed the way her #HWstyle pictures are taken.

Because of social distancing rules, Holly now takes the pictures herself.

“How do you manage to get that angle? Gosh!” one follower commented.

Holly holds the camera high above her head so that she can get every aspect of her daily look in the shot.

An end to Holly’s annoying habit?

However, many of her followers don’t like the new way of doing things and often slam Holly’s habit as annoying.

Now, however, a couple of her fans think they’ve come up with a solution.

“Why can’t someone take your picture?” asked one.

“A cameraman can film you?” they added.

“Because it’s her phone and I don’t think she wants people holding her phone,” said one savvy Holly fan.

“Could the cameraman not take a picture and send her it via bluetooth?” the original poster suggested.

“I didn’t think of that LOL!” the other person laughed.

Could the pair have found a solution to something that’s been bothering Holly’s fans since lockdown began?

Might she be about to change the way she takes her pictures?

There’s only one way to find out… Watch this space for tomorrow’s #HWstyle picture!