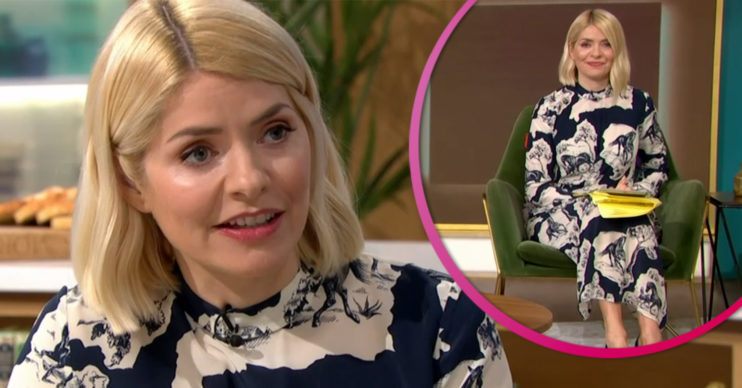 Holly Willoughby divides fans with dress on This Morning today

The presenter sported a £249 dress for Monday's show

Holly Willoughby divided fans with her dress on This Morning today.

On Monday’s show, the presenter, 40, wore a silk midi dress from Whistles which featured a galloping stallion design.

The navy and white dress features a high neckline and a “cinched in waist that twists at the front”.

Holly shared an image of her look to Instagram and wrote: “Morning Monday… how was your weekend? See you on @thismorning at 10am.”

Many of Holly’s followers loved the outfit, but some people weren’t keen.

One commented: “Oh no, don’t like this one sorry.”

A third said: “Ermm not the best sorry Holly.”

However, one gushed: “Love the printed dress! It looks beautiful.”

Another added: “Ooh wow I love this dress!”

One wrote: “Lovely dress Holly you look so beautiful and elegant.”

Another commented: “Oh my I need this dress in my life.”

Meanwhile, it comes after an exciting week for Holly last week.

During This Morning on Thursday, the presenter was offered a guest role in Midsomer Murders.

She added: “I mean you’re going to have to kill me off really quickly because I’m terrible at acting.

What do you think of Holly’s dress today? Head to our Facebook page @EntertainmentDailyFix and tell us.