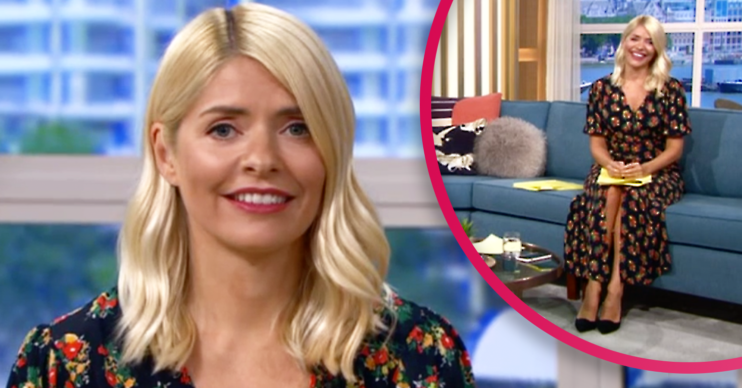 It’s only her third day back at work but already the trolls are out to get This Morning star Holly Willoughby.

The star looked entirely gorgeous in the £265 Rixo Staci dress.

However, after she uploaded her daily #HWstyle photo to Instagram, it was clear not everyone felt the same.

Posing backstage before she went on air, Holly struck a model-like pose as she showed off her outfit.

She said: “Morning Thursday… see you on @thismorning at 10am… Dress by @rixo.”

Then came the comments…

“So that’s where my nan’s curtains went,” one posted underneath Holly’s picture.

Others took issue with the price of the designer dress.

“Adore Rixo but sadly very expensive for most,” said another.

So that’s where my nan’s curtains went.

“Would be lovely if you could wear something for under £50,” said another.

“Sort your hair out!”

Some even felt the need to comment on Holly’s hair.

“Chop the bob,” one demanded.

One went a step further.

“Holly, sort your hair out – it’s a complete mess,” they stated.

The This Morning star’s fans had her back, though.

“It’s stunning, like everything else she wears,” said one.

“Yet another gorgeous dress Holly. You look so beautiful and elegant,” said another.

Another branded the outfit – and the woman wearing it – “perfection”.

Holly raised eyebrows earlier on in the week when she returned to the show following her summer break.

She wore an outfit costing an eye-watering £800, with some commenting that Holly was “alienating” the show’s “working class” viewers.

She wore a black ditsy dress by French Connection which retails at £110.