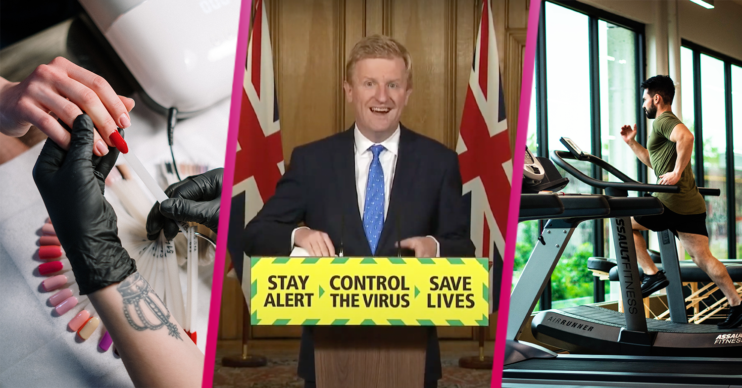 They've been closed since March

The government has announced when gyms, pools and nail bars in England can reopen.

They have all been shut since lockdown began in mid-March.

He announced details of how the economy will be able to further reopen as lockdown eases even more over the next few weeks.

On July 3, Prime Minister Boris Johnson revealed that gyms would be allowed to reopen in a “couple of weeks”.

Now, however, it appears the government has a reopening date in mind.

When can gyms reopen?

Dowden said: “As we’ve made huge progress we’ve gradually seen the things we’ve loved return and today I’m pleased to announce that we can go a little bit further.”

Gyms were forced to remain closed as hairdressers and pubs reopened on July 4.

And it’s now been announced they will now be given the green light to reopen on Saturday July 25.

As we’ve made huge progress we’ve gradually seen the things we’ve loved return and today I’m pleased to announce that we can go a little bit further.

Dowden said: “People will no longer have to work out in the park or on their living room floor. They will be able to get back into their gyms, their indoor swimming pools, their leisure centres and jump on that spin bike for the first time in months.”

Nicola Sturgeon also revealed that gyms in Scotland can reopen on July 31.

Read more: Doctors release a list of the places you’re most likely to catch coronavirus

When gyms do reopen, strict guidelines – such as limiting the number of people allowed in at once – will be in place.

Dowden revealed there will be timed entry, increased cleaning and reduced class sizes.

When can nail bars reopen?

There was good news too for those in need of a manicure as nail bars are also set to reopen.

He said it would be “subject to some restrictions on particularly high risk services”.

A boost for the arts

There was also good news for theatre lovers.

“As of this weekend, our artists, musicians and dancers can start performing live outside to outdoor audiences,” the MP said.

He added: “We won’t see crowds flooding into the venues, but from the 11th July, theatregoers can experience a live play for the first time in months.”

He added venue capacity would be reduced and organisers urged to move to electronic ticketing to help test and trace.

“From this weekend onward, many people will be able to rejoin their local sports teams,” he said.

Head to our Facebook page @EntertainmentDailyFix and tell us what you think of the news.