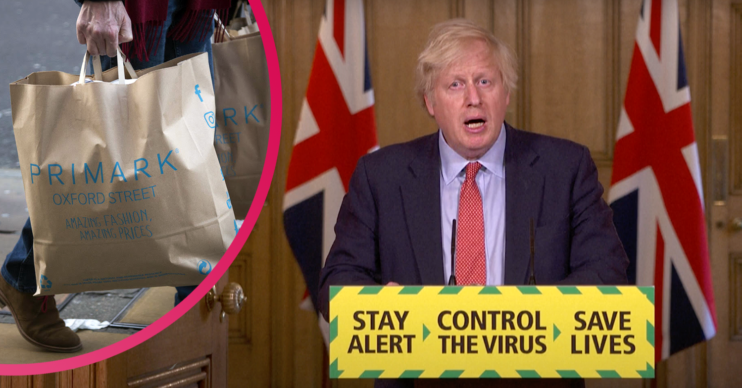 Shops can reopen next month…

Prime Minister Boris Johnson last night (May 25) announced that non-essential shops – such as Primark – will be allowed to reopen from June 15.

However, far from being pleased, some Brits have slammed the PM and asked if someone can “explain the logic” behind the decision.

“Let me get this straight. From June 15th you can go on a Primark shopping spree but still can’t see your friends/family?! Someone PLEASE explain the logic to me,” said another.

On June 15, when lockdown eases, all non-essential shops are allowed to re-open.

However, the government has yet to announce when Brits will be able to see their friends and family.

So we aren’t having a funeral for my nan because we can’t narrow it down to ten people but we can buy a car and go to Primark. Great. That feels right. Thanks @BorisJohnson

“So we’re allowed to go to a Primark before we’re actually allowed to see our own family,” said another.

“I’m so so glad that as of the 15th of June I’ll be able to pop off to Primark to buy some fluffy socks, but I still won’t be able to give my dad a hug,” another tweeted sarcastically.

So we’re allowed to go to a Primark before we’re actually allowed to see our own family.

“So we aren’t having a funeral for my nan because we can’t narrow it down to ten people, but we can buy a car and go to Primark. Great. That feels right. Thanks @BorisJohnson,” said another angry Brit.

Others sympathised with the woman.

One tweeted: “We can’t have a proper funeral for my brother but I can send my four year old to school. I can buy a car, buy some clothes and teach a class of 15 where social distancing doesn’t matter.”

Can’t see your grandma but you can wrestle Karen for a top at Primark June 15th! #primark #Covid19UK

One person claimed the government “doesn’t care” about “you or your family”.

They stated Boris and co “just want to get the economy going again”.

The person tweeted: “People can go back to workplaces like Primark on the 15th of June because the government just wants to get the economy going again. They don’t care about you or your family. This is a purely financial move. Hence why you can’t go and hug your mates before going for a shirt.”

Isn’t it mind boggling how soon, if you want a bit of clothing from Primark, you can do that… But you can’t hug a family member or friend? Almost like they value the economy over people’s mental health and wellbeing… 🤔

Others branded it a “f**king mess”.

“So from the 15th of June we can pop to Primark and swap air with other scumbags wanting £2 socks, yet we can’t go into our parents houses?” they said.

They added: “What a f**king mess all of this is, Boris is making it up as he goes along.”