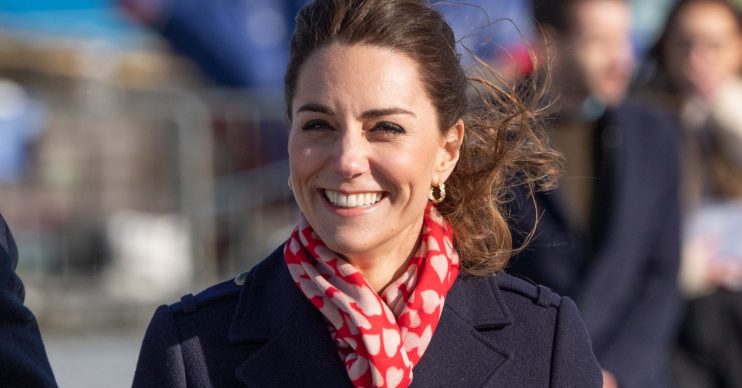 Following their night out at the BAFTAs

The Duke and Duchess of Cambridge were pictured out for a string of royal engagements in South Wales today, following their glamorous night out at the BAFTAs on Sunday.

And Kate Middleton’s outfit featured a Valentines Day-inspired twist, as she wore a red dress from Zara beneath a navy blue coat from Hobbs to keep out the coastal chill.

Read more: The Duchess of Cambridge looks far from blue as she steps out in gorgeous teal coat

She finished off the look with a red clutch bag that was, according to Hello! magazine, from Mulberry.

The Cambridges visited Mumbles, an area located on the western edge of Swansea Bay, along with Port Talbot on the opposite side of the bay.

During their visit, Will and Kate reportedly boarded a lifeboat and chatted with Royal National Lifeboat Institution crewmembers about their experiences.

They also met volunteers and watched a lifeboat launched in a training exercise at Mumbles.

It follows the couple’s appearance at the 2020 BAFTA awards over the weekend.

Kate stunned royal fans in a recycled Alexander McQueen dress – a custom-made floor-length white and gold gown she previously wore for an official visit to Malaysia in 2012.

This time around, the garment’s floaty white chiffon sleeves had been changed for mid-length fitted sleeves and structured shoulders.

It was all smiles as the couple took to the red carpet, although Will and Kate were left cringing at one point when actress Margot Robbie made a joke about Prince Harry.

Collecting an award on behalf of film star Brad Pitt, Margot told the audience, “[Brad] also said that he’s going to name this Harry because he’s really excited about bringing it back to the States with him” in reference to Harry’s decision to step down as a ‘senior’ royal with wife Meghan Markle and split his time between the UK and Canada.