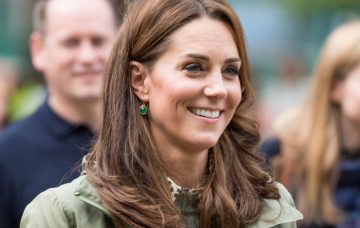 She looked thrilled to be back in the spotlight!

The Duchess of Cambridge donned a pair of skinny jeans as she returned to work following her maternity leave.

As she spent the afternoon walking around a park, Kate dressed for the occasion, teaming a pair of brown Zara skinny jeans with sturdy Penelope Chilvers brown boots.

She finished her look with an olive green jumper worn over a patterned blouse and an olive rain coat from Fjallraven.

Fans were thrilled to see Kate back on official duty again!

One tweeted: “Wonderful to see the Duchess Cambridge back! We missed her! This is a great organisation for children in the city to get closer to nature.”

Another said: “Nice to see Duchess Catherine back on duties. She’s so charming!”

A third added: “So glad she’s back we’ve missed her.”

The Sayers Croft Trust is a charity that aims to involve the local community, especially children, in the enjoyment and care of the environment.

The Duchess of Cambridge is visiting @SCTrust Forest School and Wildlife Garden, which gives inner city children a unique opportunity to learn about and engage with the natural world 🍃 pic.twitter.com/GdB9v20r2H

— The Duke and Duchess of Cambridge (@KensingtonRoyal) October 2, 2018

Although she hasn’t attended a public engagement in her royal capacity until now, she has been at other events since Louis’ birth, including the royal wedding of Prince Harry and Meghan Markle – now The Duke and Duchess of Sussex – in May.

There was also Louis’ christening at St. James’ Palace in July.

She also joined other senior members of the royal family on the Buckingham Palace balcony at Trooping the Colour in June to mark the Queen’s official birthday.

Kate is expected to be among the guests at Princess Eugenie’s wedding next week, too.

Eugenie will marry fiancé Jack Brooksbank at St. George’s Chapel at Windsor Castle on October 12. It’s the same venue where the Duke and Duchess of Sussex married.

Meanwhile, the Duke of Cambridge has just returned home from an official visit to Namibia, Tanzania and Kenya.

William, 36, travelled to the countries in his capacity as President of United for Wildlife and Patron of Tusk Trust, ahead of the Illegal Wildlife Trade conference 2018 which is being hosted by the UK government next week.

It was described as a “private working trip” that included a small number of official engagements on behalf of Her Majesty’s Government.

Are you pleased to see Kate back in the spotlight again? Leave us a comment on our Facebook page @EntertainmentDailyFix and let us know what you think!