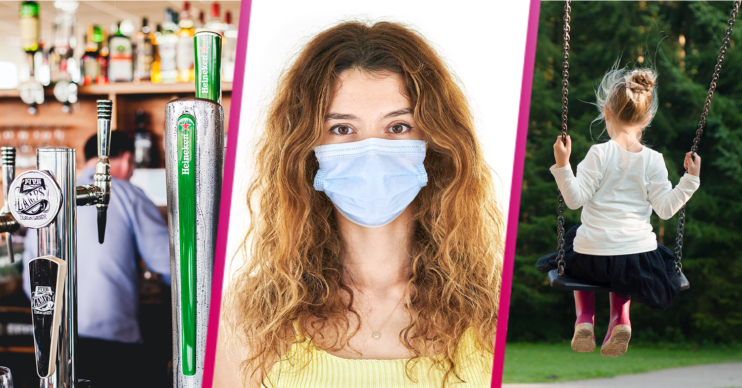 Doctors in America have released a list of the places you are most likely to contract coronavirus.

The list, released by the Texas Medical Association, ranks popular activities on a scale of one to 10, with 10 being the most risky activity.

And there’s bad news for anyone who might be planning a trip to a bar or pub.

It is deemed the most risky of all activities, scoring nine on the list.

The news comes as three pubs were forced to close following Super Saturday.

Boris Johnson reopened pubs in England, however, three have now closed their doors once more after outbreaks of coronavirus were reported.

Read more: Holly Willoughby is teased for dressing as a nurse on penultimate show

Right up there alongside pubs on the list is attending a concert, although they are currently banned.

Going to a sports stadium and attending a religious service with more than 500 people rank just as highly.

Where you’re most likely to contract coronavirus

Trips to cinemas are considered almost as risky as a visit to the pub.

The TMA lists the activity as an eight on the list – and it’s the same risk factor if you’re going to an amusement park.

Working out at a gym – which remain closed – and eating at a buffet restaurant are also rated eight on the scale.

So if you’re one of the many who are looking to get their hair cut now lockdown has eased, take precautions and wear a mask.

A trip to the salon is given a seven on the risk factor scale.

Attending a wedding or funeral, travelling by plane and hugging or shaking hands with a friend when meeting also rank seven on the list.

Playing sports such as football or basketball are equally risky.

Sending your kids to school, working in an office for a week swimming in a public pool and visiting an elderly relative in their home are rated six.

Going to the beach, visiting a shopping mall, attending a barbecue in someone else’s garden and having dinner at someone else’s house rate five on the scale, however.

With hotels once again reopen, you’ll have to weigh up the risks if you fancy a break.

Doctors worked from the assumption that – no matter the activity – participants were taking as many safety precautions as they can.

A two-night hotel stay is rated four on the risk scale.

It’s classed the same as sitting in a doctor’s waiting room, going to a library, eating outside a restaurant, spending an hour at the playground and walking down a busy street.

Things that are a little safer include playing golf and going for a walk, run or bike ride with others.

They all rank three on the scale.

Things that pose little risk, for instance, include going camping, playing tennis, getting petrol and getting a takeaway.

They all have a risk factor of two.

The most low risk thing you can do

A spokesperson said: “The levels are based on input from the physician members of the task force and the committee, who worked from the assumption that – no matter the activity – participants were taking as many safety precautions as they can.”

They added that doctors should remind patients that “no matter what they do, it’s best if they stay home if possible”.

They also advised: “Wear a mask and maintain at least six feet of distance when they have to go out”.