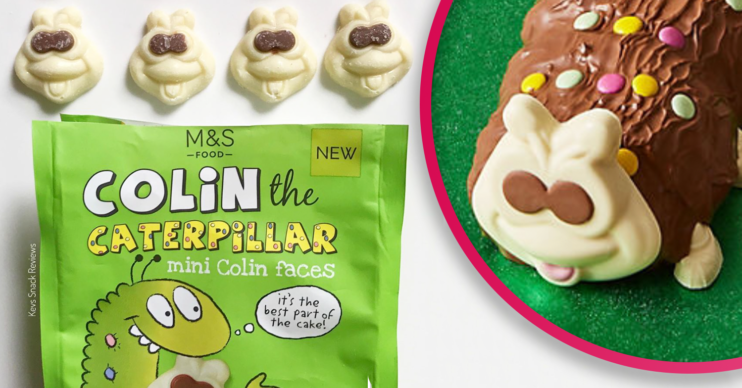 Colin the Caterpillar fans have revealed their dreams have come true after M&S launched bags of Colin The Caterpillar Mini Faces.

The treats take their inspiration from what’s arguably the best part of the chocolate cake – Colin’s solid white chocolate face.

Now fans of Colin the Caterpillar no longer need to fight over that coveted first slice.

Instead, just pick up a bag of the white chocolate mini faces and dive right in!

Kev’s Snack Reviews was one of the first to spot them in store and posted his find to Instagram.

How much are the new Colin the Caterpillar sweets?

Read more: Food with high salt content to be banned from advertising on daytime TV

Kev added: “They’re simple white chocolates with some milk choccy eyes, and of course half the fun is that they’re Colin shaped.”

He added: “Be sure to keep an eye out for these!”

Wow! They better be the same size as the one on the cake though!

“I’m off to M&S to get some right now,” said one Colin fan. “This is my favourite launch of the year.”

Another added: “Oh my, this is the best.”

“My dream,” another drooled.

“Wish it was the feet too!” said another fan of the M&S cake, that also has solid white chocolate feet.

“Mmmmm, all about Colin!” another added.

“Wow! They better be the same size as the one on the cake though!” demanded another.

“Unreal, they look so good,” another commented.

Others were making plans to visit M&S pronto!

“Whilst Percy Pig is partying, Colin has been busy making copies of his face for you to munch on!” Kev quipped.

The colourful sweets cost £1.65 per bag and appear to show naughty pig Percy covered in splashes of paint.

“Need these and the caterpillar faces!!” said another. “I’ll go on a shopping trip today.”

Head to our Facebook page @EntertainmentDailyFix and tell us if you’ll be trying the new chocs.