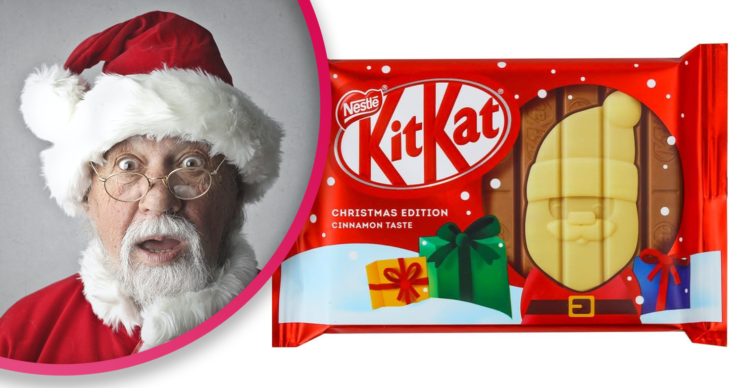 It doesn't get any more festive than this!

KitKat fans are delighted as a Christmas sharer bar emblazoned with the face of Santa and flavoured with a hint of cinnamon has gone on sale in the UK.

The bar is probably the most festive chocolate offering we’ve seen this year – and certainly makes a change from the influx of chocolate orange goodies launched in 2020.

The Christmas Edition KitKat is called Cinnamon Taste and, according to early testers, it does exactly what it says on the tin.

Kev’s Snack Reviews shared a picture of his bar on Instagram.

He called it a “nice little seasonal snack”.

Read more: You can now get a Ferrero Rocher Frappuccino at Starbucks

Kev revealed: “It has cinnamon flavour milk chocolate with a white chocolate Santa shape, and I think it looks rather cool!”

He added: “The cinnamon flavour is subtle but rather nice and blends well with the milk and white chocolate. It’s just right and adds a sweet cinnamon kick to an otherwise regular KitKat.

“The white chocolate part adds an extra bit of creaminess that works nicely.”

The bar is technically a sharer and weighs in at 108g.

“Wow it’s massive!” said one of Kev’s followers. “I expected it to be much smaller.”

Read more: Holly Willoughby fans divided as she wears dress that looks like a ‘sweet wrapper’ on This Morning

“Looks and sounds nice!” declared another.

“I like how they’ve made this with the Santa in it,” smiled another.

“I want that KitKat!” another declared.

Well, if you want to give it a try, we have some bad news…

It’s a Russian import and, as such, isn’t available in UK stores.

GB Gifts has imported them, but there is naturally a but…

It’s proved so popular that it’s currently sold out.

However, there is a handy box on the website here that’ll alert you once new stock arrives and it goes live on the site.

Also keep an eye out on Amazon, as savvy shoppers have been snapping them up on there.

One said: “Chocolate and cinnamon is one of my favorite combinations so when this was recommended to me by Amazon I couldn’t resist.

“It’s easy to mess up the chocolate-cinnamon by being heavy handed with either. These KitKats are the perfect balance!

“They are chocolaty and just enough cinnamon that it balances so well. Then the normal crunch and texture of a KitKat. They’re wonderful and such a special treat!” they added.

“I plan to stockpile some for myself to enjoy throughout the holiday season and into the new year.”

Head to our Facebook page @EntertainmentDailyFix and tell us if you want to try it.