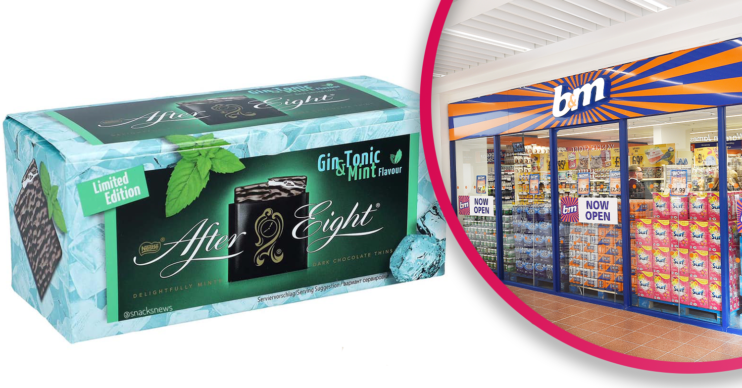 Earlier this summer, we told you about an epic chocolate and booze team up that saw Gin & Tonic After Eight mints become a reality.

However, they were an overseas import and only available to buy online.

And prices were a bit steep when you factored in postage and packing.

However, now news reaches us that the delicious chocolates – which so many ED! readers were keen to try – are actually now available on the high street.

And you can pick them up in one of our favourite stores.

Yes, next time you’re in B&M, head to the sweetie section and keep your eyes out for the G&T After Eight mints.

They’re on sale in stores now, according to Instagram foodie Kev’s Snack Reviews.

And, what’s more, they won’t set you back a pretty penny.

Earlier on in the summer, the launch was branded the “collaboration to end all collaborations”.

News of the epic team up between the confectionary and booze aisles filled food fans with glee.

Originally imported from Germany, the 200g boxes were on sale exclusively on sweetie website GB Gifts.

However, that’s all changed now thanks to their introduction in B&M.

“If you see any on your travels…” said one After Eight fan tagging their pal.

“Over the moon at this news!” said another.

“Oh my life!” declared another G&T and chocolate fan.

“OMG, need to try these,” said another.

Having tasted them, we can confirm that indeed they are!

One word of warning, however, you’ll have to be quick if you want to sample the after-dinner mints.

The box reveals that the treats are a limited-edition buy, so we’d plan in a trip to B&M sooner rather than later!

“When are we going to get some?!” one fan questioned their pal.

Soon, we’d advise, as we predict these will sell like hot cakes.