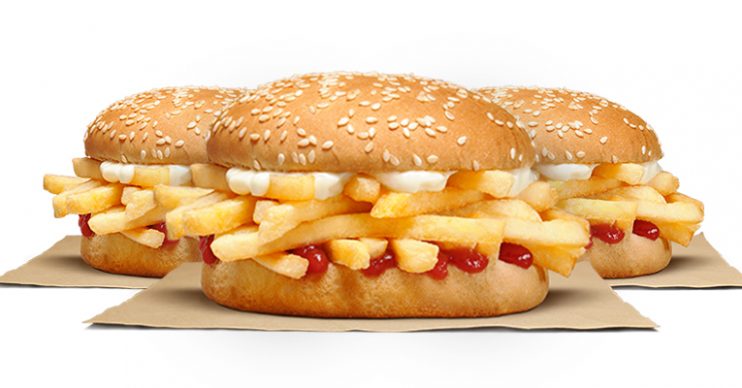 Haven't we been eating this for years?!

Burger King has been accused of ripping off a British classic with the latest addition to its menu.

Yes, the good people at Burger King have “invented” a chip butty – something us Brits have loved for years.

The new sandwich is a trial item on the menu in Burger King in New Zealand.

The website states: “With crispy golden fries, mayo and ketchup, nestled between two soft buns, His Royal Fry-ness, the CHIP BUTTY has arrived. A dish fit for a King at a price fit for everyone.”

It’s priced at $2, which works out at a really rather reasonable 99p.

However, even the low price point hasn’t pleased BK fans.

Welcome to the 21st century @BurgerKing, Brits have been eating chip butties for decades.

“There’s no such thing as a bad idea unless the idea is to ask people to pay for a few fries inside a bun with a splash of ketchup and mayonnaise,” said one not-so-happy customer.

They added: “Burger King, what are you doing?”

Read more: Shoppers thrilled as Asda reveals plans to launch Greggs counters inside some of its stores

They stated that adding sides to a burger had worked well in the past, citing the addition of onion rings to one burger.

However, they added: “But there has to be a burger to elevate. Fries in an empty bun is two dry carbs pretending to be something of substance or flavour. Yes, $2 is cheap for a piece of food. But it’s a high price to pay for something that shouldn’t exist.”

Others sarcastically welcomed Burger King to the 21st century and said us Brit have been eating the chip butty for years.

Welcome to the 21st century @BurgerKing, Brits have been eating chip butties for decades

We are waaaay ahead of you pic.twitter.com/n4h9Pjl9Ew

Another joked: “Chip butties have been around since chips were invented by Sir Francis Drake.”

Others had some advice for how Burger King could improve the sandwich.

Shouldn’t have sauce. The baps should be buttered.

However, if New Zealanders do want a little more substance – and by substance we mean meat – in their burgers, then the Chip Butty also comes in a version fit for carnivores.

The Chip Butty with Bacon costs the same as the original menu item and hopefully goes some way to appeasing one Twitter user who called on the fast-food chain to “make the buns meat”.

Would you try the Chip Butty if Burger King adds it to the menu here? Tell us on our Facebook page @EntertainmentDailyFix.