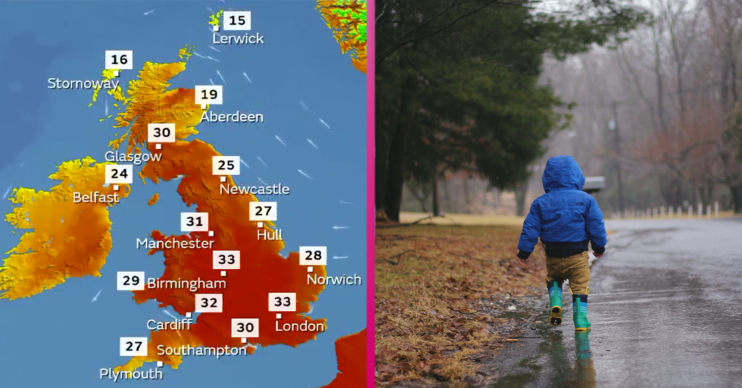 Enjoy the sunshine while you can!

Brits are set to bask in sunshine on the hottest day of the year so far today, with temperatures hitting highs of 34˚C.

Rising temperatures yesterday (June 24) saw Brits flock to the beach, with the UK hotter than Barbados.

It’ll be even hotter today, with the Met Office issuing warnings about the high levels of UV.

It said Brits need to take extra care when out in the sun and warned that people could get some serious sunburn in as little as 15 minutes.

The Met Office also raised its heat level warning to three and urged sun seekers to protect themselves during the “exceptionally hot weather forecast this week”.

Read more: B&M’s £5 dog cooling mat is back in time for the heatwave

Chief metrologist Dan Suri said: “This hot weather is expected to last until at least Friday and so heatwave conditions are likely to develop for some areas this week.”

A Met Office warning added: “Spend time in the shade between 11am and 3pm. Shirt, sunscreen and hat essential.”

Thursday morning will start dry, #sunny and warm for most of us with temperatures already in the low 20s Celsius for most of England and Wales by 8am.

However, watch out for some heavy showers and #thunderstorms if you live across central and northern Scotland.#UKHeatwave pic.twitter.com/pmWYuOQhvF

However, we all know that every heatwave has to break – and it’s going to break spectacularly, according to forecasters.

They have said that Brits can expect to be drenched as three days of thunderstorms hit our shores.

Deputy chief metrologist Matthew Lehnert was the bearer of the bad news.

He revealed: “We’re also seeing an increased risk of thunderstorms towards the end of the week, which is expected to bring an end to the very warm and sunny weather.”

Indeed, weather warnings are in place for large parts of the UK for Thursday, Friday and Saturday.

So it looks as if the weekend, when most of us are off work, will be a bit of a washout.

They’re expected to sweep in at around 4pm today (June 25), bringing with them heavy rain, lightening and hail.

Read more: The VW Campervan range is perfect for your summer staycation

Storms are expected in the South West and South East of England, Wales, western Scotland and Northern Ireland.

As we go into Saturday, we’ve got more cloud around, more rain at times. All of us will see the rain on Saturday at some time.

He said there’s a “chance of a few showers and thunderstorms across England to begin with, but the main focus, again, will be across some western areas where you do see those storms”.

He added: “They will be torrential.”

Taylor continued that temperatures would still be “on-trend, 29˚C possibly 30˚C in East Anglia, but in western areas starting to feel a little less hot and humid”.

Come the weekend, low pressure dominates the weather in the northwest of the country.

“As we go into Saturday, we’ve got more cloud around, more rain at times. All of us will see the rain on Saturday at some time.”

Next week is set to be much cooler, breezy with rain or showers.

Head to our Facebook page @EntertainmentDailyFix and let us know how you’ll be enjoying the sun – while it lasts!