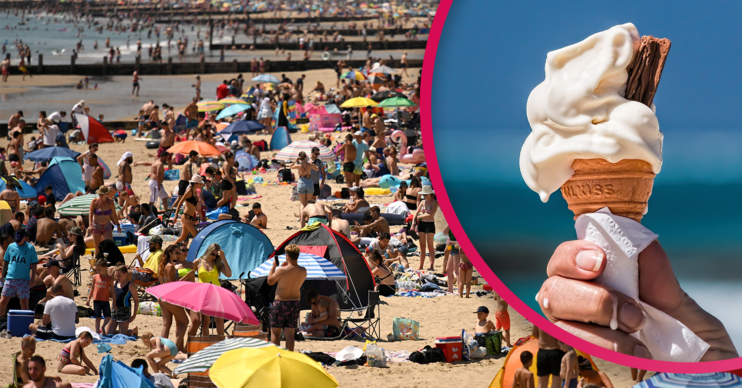 But there are worries crowds could descend on beaches again…

Brits are set to bask in a week of sizzling heatwave-like temperatures later this month.

Gone are the soggy rain-soaked days of June as the sun is finally set to get its hat on.

And, on the subject of hats, you might just need to wear one, because it’s going to be scorching.

Highs of up to 30˚C are predicted by Netweather as the jet stream moves south, with the mercury set to start rising at the tail-end of this coming weekend.

Come Sunday (July 12), temperatures are forecast to rise, with the warmer weather sticking around till July 20.

Many parts of the country are expected to reach 26˚C and, next Thursday (July 16), most of the UK will be basking in sunshine.

However, before the heatwave hits, the rain is going to pour.

Three days of torrential rain are set to hit parts of the UK from tomorrow (July 7).

It’s thanks to an area of low pressure moving in from the Atlantic.

A rather wet week ahead for many, but with sunny spells too: pic.twitter.com/9s8GG8Q22q

The Met Office blamed the two weather extremes on the UK being “between weather systems”.

Next week is forecast to be “fine with sunny spells for many through Monday and Thursday”.

The warm spell is all thanks to a southerly wind that’s moving in from the weekend.

BBC forecaster Helen Willetts said: “The temperature is likely to start to rise.”

The Met Office’s long-range forecast added: “Temperatures are likely to be either around or on the warmer side of average, with the warmest conditions likely in the southeast.”

“The idiots will descend again!”

However, with the rising temperatures come renewed fears for beach overcrowding as the heatwave hits.

Temperatures are likely to be either around or on the warmer side of average, with the warmest conditions likely in the southeast.

One Brit said: “Oh great, all the idiots will descend onto the beaches again!”

Another added: “When idiots flock to the beaches and parks because of the heatwave it’s no surprise that coronavirus cases are beginning to rise again.”

“Bloody hell, over-crowded beaches again, not to mention that the pubs there will be jam packed,” a third commented.

Last month, Bournemouth beach declared a major incident due to overcrowding as 500,000 swarmed to the area to enjoy the sun.