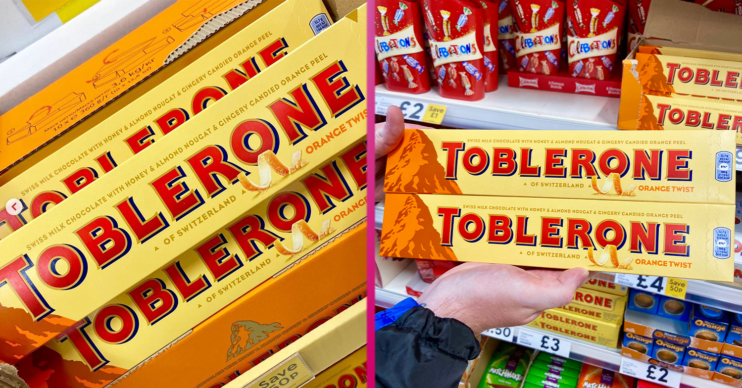 The flavour combo is taking over the world!

Hot on the heels of yesterday’s Cadbury Orange Fingers and Orange Giant Buttons comes another chocolate orange launch – and this time it’s an orange Toblerone.

Yes, it would appear 2020 is officially the year of the chocolate orange.

And this new launch has citrus fans practically fizzing with excitement.

Our ever-reliable foodie blogger pals at NewFoodsUK alerted us to the find.

“Found this today in Tesco!” they told ED!.

“Yes, another orange product, however, we do love orange-flavoured chocolate, so win win!!

“Wonder what other orange-flavoured products will be released next?!”

The country’s chocoholics lapped up the news, so it certainly seems as if there’s a gap in the market for more chocolate orange goodies!

Orange-flavoured chocolate is taking over the world!

“Orange-flavoured chocolate is taking over the world,” another stated.

“OMG ALL THE ORANGE THINGS!” screamed another.

“Oh my god!” exclaimed another with the love heart eye emojis.

“These look a bit of alright,” said another.

“I need this in my life,” said another.

“Need to try this,” another confirmed.

Others suggested the orange Toblerone is actually a Christmas product.

“Where is all this good stuff coming from?” one woman said, tagging her pal.

“We’re getting close to September and you know what that means…” came the reply, with the Santa emoji.

If you want to try the new bar, visit your local Tesco now, or head online, where you can pick it up for the offer price of £4.

As fans of chocolate orange will no doubt be aware, online sweet shop GB Gifts has actually been stocking an imported orange Toblerone from Germany on its site for a while.

This one – called the Toblerone Gingery Orange – also features a hint of ginger.

Let us know if you’ll be trying the orange Toblerone on our Facebook page @EntertainmentDailyFix.