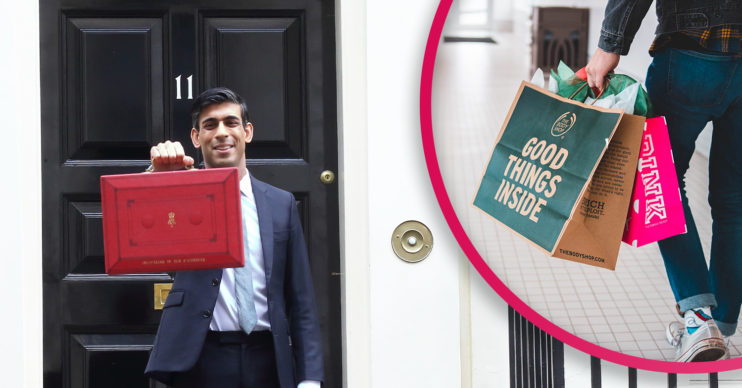 It’s thought he will set out his plans to save the economy from collapse in the wake of the coronavirus crisis in his second financial speech of the year.

The speech isn’t an official “fiscal event”, so it isn’t a budget or spring or autumn statement.

However, it is expected to include a series of boosts to the economy in the hope of saving millions of jobs as the furlough scheme comes to an end.

What will be in the mini budget?

There could be good news for those looking to pick up a little something from the high street under a new rumoured schemed.

Read more: Aldi is giving Brits the chance to win a year’s supply of shopping vouchers

It’s reported that everyone will get a £500 shopping voucher if a scheme Mr Sunak is considering goes ahead.

A report by think tank the Resolution Foundation claims the chancellor is looking at a £30 million high street voucher scheme.

The scheme would see adults receive a voucher worth £500 to spend in hard-hit sectors of the economy, such as face-to-face retail, hospitality and leisure.

Kids would get vouchers worth £250.

Good news could be in store for home buyers, too.

It’s been widely reported that Sunak is considering a cut in stamp duty.

The property tax threshold could be increased as high as £500,000 in a bid to exempt most homebuyers from paying any stamp duty and kickstart the economy.

It’s thought this could last for six months.

If you run a company and are happy to employee trainees then you could be in line for a government payout.

It’s said more than £100 million is being invested in traineeships for 18-24 year olds.

Businesses offering new traineeships in England will receive a £1,000 bonus per trainee as part of the scheme.

A source close to Mr Sunak told The Sun: “The chancellor’s focus is on protecting and creating jobs and supporting people back into employment, particularly the young.”

A new Green Homes Grant scheme is also set to be announced tomorrow.

Sunak plans to create more than 100,000 green jobs and hand out £2 billion in vouchers to insulate homes.

The focus is on protecting and creating jobs and supporting people back into employment, particularly the young.

Hundreds of thousands of households will get grants of up to £5,000 to make their homes more environmentally friendly.

Vouchers with £10,000 will be given to some of the country’s poorest residents.

Homeowners will be able to spend the cash on loft, wall and floor insulation.

The scheme will go live in September and it’s thought it will save families up to £600 a year on energy bills.

Elsewhere, £1 billion will be spent on “greening up” public buildings such as schools, hospitals and social housing.

There will also be a £50 million scheme to make social housing more environmentally friendly.

Double glazing, heat pumps and insulation will be included in a refit.