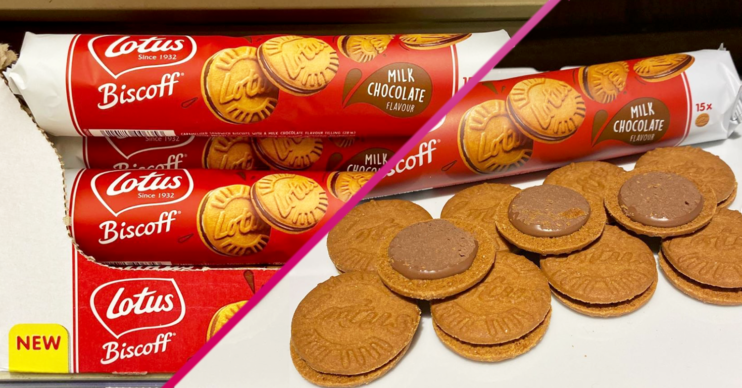 Get yourself down to Morrisons!

Fans of Lotus Biscoff are “so excited” to discover the brand is selling a new flavour of its most recent launch.

Back in April, ED! told you Lotus was launching a new range of Biscoff Sandwich Cookies.

The packets featured two Biscoff biscuits sandwiched together with a delicious cream.

Back in the spring, one of the three flavours that are available overseas was launched here.

And fans couldn’t get enough of the original biscuits, which featured a layer of Biscoff spread in the middle.

Now, though, a second flavour has landed.

And it’s good news for chocoholics.

“Finally the chocolate ones are in the UK,” foodie blogger NewFoodsUK revealed.

The packets have been spotted on the shelves of Morrisons and feature a milk chocolate-flavoured cream nestled between two Biscoff cookies.

“I’ll know what I’ll be looking for next time I’m in there,” said one chocoholic.

“OMG they will be lush,” said another.

“Corr! Get me to Morrisons now!” another exclaimed.

“Oh my god I need to try these,” said another.

“Get your Lotus-loving mitts on some of these,” she teased.

Another foodie blogger, HelenJTea, revealed what she hopes the Lotus team will bring out next.

“So excited we now have Chocolate Biscoff Sandwich biscuits in the UK,” she started.

Get your Lotus-loving mitts on some of these!

“Although I love the new chocolate flavour, I personally prefer the flavour of the Biscoff cream,” she added.

Then came the recipe suggestion.

“I’m hoping @lotusbiscoffuk make a chocolate covered version of these next,” she said, tagging the brand.

We do too, so we sure hope they’re listening!

“Chocolate covered would be a dream,” said one of her followers.

“Omg chocolate covered would be amazing,” said another.

Next to launch in the UK, we expect, will be the third in the trio of the brand’s Sandwich Cookie range – one that’s filled with vanilla cream.