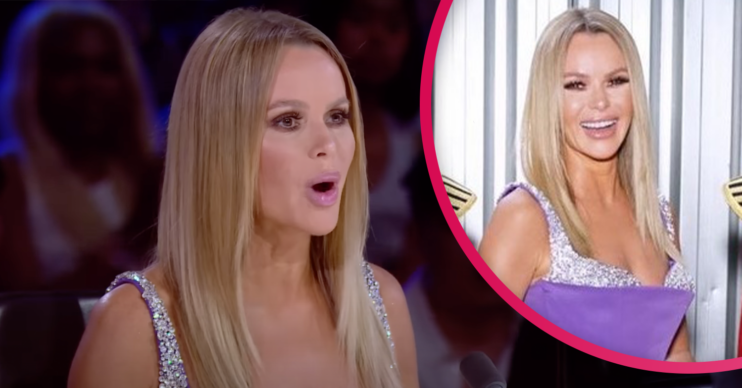 The second BGT semi-final took place last night (May 31), with judge Amanda Holden pulling out all the stops in her bespoke gown.

She wore a bespoke purple dress with silver sparkly beading by Suzanne Neville.

It featured the world’s highest split, with the dress held together with two garter-style sequin straps.

Fans of the series took to Twitter and Instagram to reveal if they thought the outfit was a hit or a miss.

And it’s fair to say the purple sparkly dress fared better than Amanda’s outfit for the first Britain’s Got Talent semi-final.

On Monday night Amanda was told to dress more appropriately for her age.

However, last night there was none of that.

One viewer declared: “I swear I am living for Amanda Holden’s outfits.”

“Just loved your dress tonight, it was divine, stunning,” said a third.

Not enough words in the English dictionary to say how beautiful this gorgeous woman really is.

Others pointed out how lucky Amanda’s husband Chris Hughes is to have Amanda on his arm.

“I sooooo envy your husband!” declared one swooning fan.

“What a woman!” said another.

“Smokin’! You must work hard to look that fabulous!!!” said another.

“Not enough words in the English dictionary to say how beautiful this gorgeous woman really is,” another concluded.

However, there’s always one who attempts to bring the mood down by offering their critique of Amanda’s look.

“She really isn’t that gorgeous, has to wear revealing stuff to be noticed… Not for me at all, extremely overrated and thinks she’s Miss World,” they added.

“Mutton dressed as lamb,” said another.

Others took exception to Amanda’s Timelapse video that showed her getting ready surrounded by her glam squad.

“Jesus Christ. Kids are starving and this entitled pleb has an entire team to make her look like a different person,” one social media user moaned.

With the third BGT semi-final airing tonight, we can’t wait to see what Amanda wears!

The Britain’s Got Talent semi-finals continue tonight (June 1) on ITV at 8pm.

So will you be watching? Head to our Facebook page @EntertainmentDailyFix and tell us.