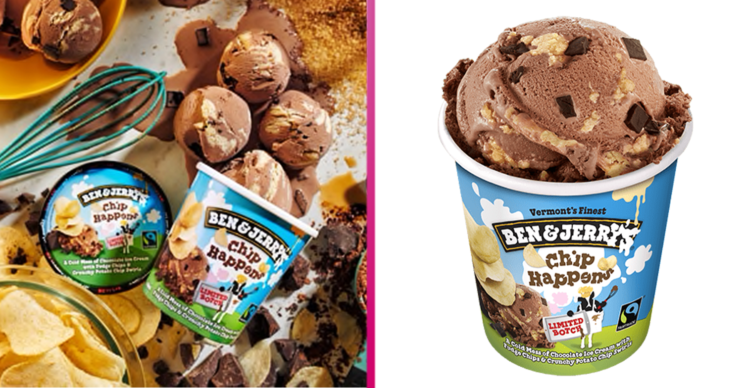 And early testers are divided

While it might not be ice cream weather at the moment, rest assured sunnier days are on their way back.

Temperatures are set to warm up next week and, with the sunshine, comes a new food launch that Brits are really rather divided about.

The ice cream in question is by Ben & Jerry’s and it’s called Chip Happens.

As the name doesn’t give away many clues about the flavour, we’ll ease you in gently.

However, there are also some “crunchy potato chips” mixed in for good measure.

You’d be forgiven for thinking it was April fools day and not mid-June!

“I’m not sure what they were thinking when they came up with this one,” said one food blogger.

“When smooth chocolate ice cream meets fudge chips and salty swirls, they pack a serious one-two crunch. The best part? There won’t be anything left to clean up,” the blurb reads.

“Ewww crisps in ice cream, that’s a step too far,” said one person who won’t be trying it.

“This makes me uncomfortable,” said a third.

“Finally it’s in the UK,” said one fan of the ice cream, which has been on sale in the States and Australia.

“OMG I’m trying it,” said another.

Launched in homage to hit Netflix show Nailed It!, the new flavour is in fact limited edition.

It’s available in Asda this month, with the tub costing £4.50.

Fudge chips, potato chips, and not giving a chip. The perfect flavour for watching the hilariously imperfect Nailed It! Find out more at the link in bio.

We know which one we probably won’t be trying!