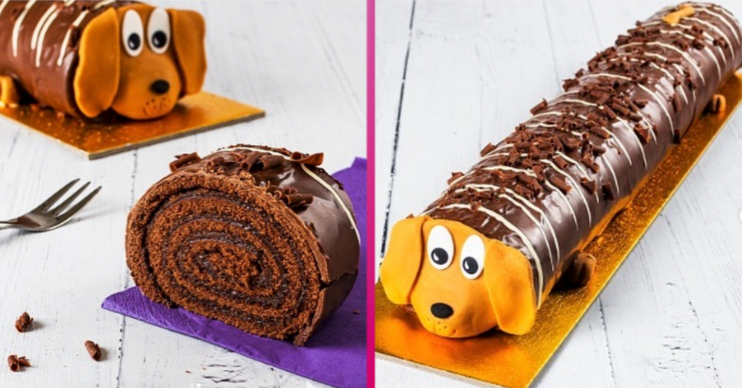 The new chocolate cake measures a foot in length!

Much like his real-life alter ego, Sid has a long rounded belly.

However, this one is very much for eating, even though he does look ridiculous cute!

Sid the Sausage Dog is perfect for birthday gatherings where a small slice of cake just won’t do.

The cake is made up of a soft chocolate sponge, rolled with chocolate buttercream and coated with milk chocolate and edible decorations.

He costs just £12 and is available to buy in store and online today (July 13).

Asda announced the news of the launch on Instagram.

The post read: “We’d like to introduce Sid the Sausage Dog. Guaranteed to create the woof-factor for any special celebration, Sid is a whole foot long, feeding up to 20 people.”

It revealed: “Sid consists of a soft chocolate sponge, rolled with chocolate buttercream. For the final flourish, he is coated with milk chocolate and edible decorations, creating a novelty centrepiece for only £12!”

Asda’s Becky Price added: “We know our customers love a novelty cake that injects plenty of fun into special celebrations at an affordable price!”

She added: “We’ve seen a rising demand from our customers for sausage dog-themed products, so Sid is a great addition to our celebration cake range and is sure to become one popular pooch!”

Indeed, the store’s Instagram followers couldn’t get enough of the pup.

Read more: Government branded “sexist” as full list of beauty treatments you can get today is revealed

“I love this! Wish it was my birthday,” said one.

“Sooooo cute ! I love this,” said another.

“Yes! Go on Sid! Might actually go to an Asda just for that!” said another.

“So @asda now do a Sid the Sausage Dog cake and it is the best thing I’ve ever seen,” added another.

So @asda now do a Sid the Sausage Dog cake and it is the best thing I’ve ever seen.

And, if you think Sid looks familiar, then he is pretty much in the same vein as Marks & Spencer favourite Colin the Caterpillar.

That cake, however, only costs £7.

Yes, it appears Sid is something of a whopper!

Some are still firmly #TeamColin, though.

One Colin fan tweeted: “This is a national outrage. Where’s the public enquiry at?”

Another added: “Colin is a national treasure!”

“Colin will never be replaced,” said a third.

One person even conducted a Twitter poll asking their followers which cake they were siding with.

Which one would you want…?

The results, it seems, are pretty unanimus!

Head to our Facebook page @EntertainmentDailyFix and tell us if you’ll be trying Sid or sticking to Colin.