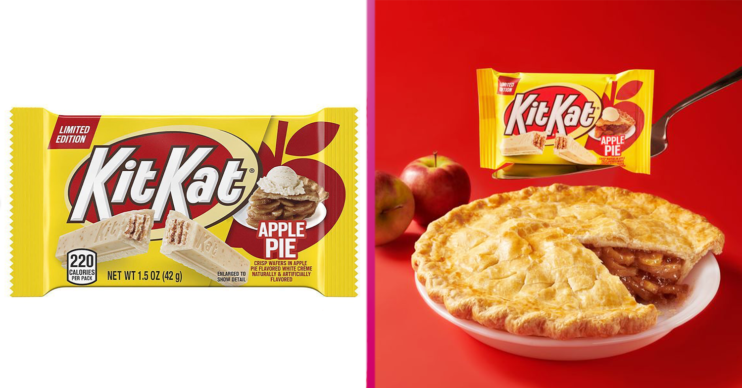 Apple Pie KitKat exists and it’s now available in the UK – for a limited time only!

It's had a lot of early rave reviews online!

Listen up, KitKat fans, because we have some pretty special news for you.

Yes, you heard it here first, a new flavour exists and it’s on sale in the UK now.

And the new four-finger bar takes it flavour inspiration from one of our favourite desserts.

Without further ado, let us introduce you to the new limited-edition Apple Pie KitKat.

KitKat describes this bar as its “iconic wafer surrounded in the delicious taste of apple pie”.

“They are soooo good!” said one fan on Instagram.

Foodie blogger Junk Food Leaks was one of the first to review the bars.

They are of course limited, and will undoubtedly be gobbled up as soon as they’re available. Super crunchy, super cinnamon and a lot of apple.

The posted: “These lil babies are great.”

The review continued: “They’re not as artificial as many apple pie products out there. It has a great crunch in the center, which many do not. And of course, it does embody some actual authentic apple flavour!”

They did have some advice for the makers, though.

“I do think that, while tough, stuffing a bit of dried apple in these things would be the one thing that would make them truly amazing,” they said.

Junk Food Leaks also said the bars were “not to be missed”.

“They are of course limited, and will undoubtedly be gobbled up as soon as they’re available. Super crunchy, super cinnamon and a lot of apple,” the post concluded.

The bars are actually an import from America.

A small price to pay for such deliciousness, we say!

“Shut up and take my money!” exclaimed another.

It’s also available on GB Gifts, although you’ll have to sign up to receive a notification when it’s back in stock.

Head to our Facebook page @EntertainmentDailyFix and tell us if you’ll be trying the new bars.