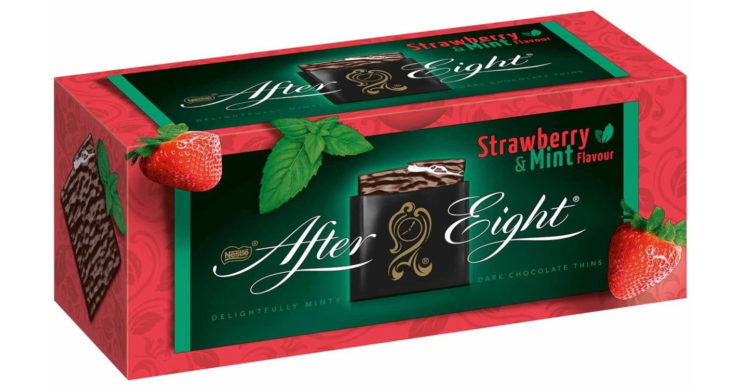 There’s a reason to celebrate if you’re a fan of After Eights as a new flavour has been launched at bargain store B&M.

Yes, the popular mint-flavoured after-dinner chocolate slither has been given an update.

And, although it may sound a little bizarre, early testers have said the summery flavour combination is “incredible”.

Let us introduce you to the Strawberry & Mint After Eight.

The wafer-thin treats are made from delicious dark chocolate that’s filled with refreshing peppermint fondant.

However, the new limited-edition treats – an import from Germany – have an added hint of strawberry.

They’re also available on Amazon if you’re isolating at home during lockdown.

If you are bored of the original, I highly recommend this. ⁣The mint flavour is dominant with a subtle hint of strawberry.

However, they’re a little more pricey there online, two boxes on sale for a whopping £15.95.

The taste of summer

“Summer is fruity,” said the blurb.

“After Eight Mint & Strawberry reissues the British classic,” it added.

The listing also urged: “Enjoy these chocolates whenever you want – because somewhere it’s always after eight.”

“They taste very nice!” said one fan of the sweets.

One foodie blogger also revealed they were a fan of the summery After Eights.

“If you are bored of the original, I highly recommend this. ⁣The mint flavour is dominant with a subtle hint of strawberry,” they posted.

“When you see them in store, please think of me,” said another on Instagram, tagging their pal.

“If you see them, buy them!” urged another to their friend.

However, the unusual flavour combination has divided die-hard chocoholics.

One said: “I’m intrigued but I know the mint is going to kill them for me.”

Others said the sweets were a “bit of a let down”, much like After Eight’s previous fruity flavours.

Nestle, which makes the minty chocolates, previously made mango and pineapple After Eights.

While a marzipan flavour has also been on sale.

“Unfortunately all of the other flavours that we’ve tried have been mildly disappointing,” said one After Eight connoisseur on Instagram.

“The marzipan were a bit of a let down to be fair,” another concurred.

Will you be trying the new fruity flavour? Tell us on our Facebook page @EntertainmentDailyFix.