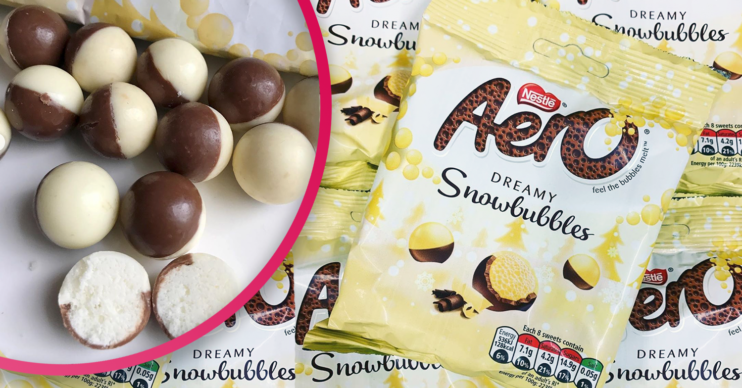 Holidays are coming and so are the chocs!

Aero Dreamy Snowbubbles are launching this Christmas but you don’t have to wait four months to get your hands on them.

Oh no, you can sample the white chocolate bubbly delights right now.

Now if that isn’t the best news you’ve heard all day, we don’t know what is!

What’s inside the Aero Dreamy Snowbubbles?

The Aero treats feature an “aerated vanilla flavour centre with a half milk chocolate, half white shell”.

And, as the name suggests, the appear to be pretty dreamy.

“New Aero White Choc Snowbubbles!” NewFoodsUK screamed alongside a picture of the sweets.

“Absolutely amazing,” they said of the chocs.

Aero Dreamy Snowbubbles are expected to his Heron Foods and Coop stores in September.

However, online chocolate shop GB Gifts has them in stock now – a month before their official release.

Update on the Aero White Bubbles

The sweets appear to update the Aero White Bubbles, which launched back in 2014.

“Like all snack limited editions, it seems they’ve come back for a second round,” food blogger Kev’s Snack Reviews revealed.

“I wasn’t too impressed with them the first time so I wasn’t expecting much this time around.

“Maybe my tastes have changed, but I found them acceptable this time,” he said.

Kev added that he did find it “odd that the bubbly centre isn’t actually white chocolate but a ‘vanilla flavour’ centre, coated in a half milk chocolate and half white shell”.

Chocoholics had no such issues, though.

One commented: “2020 – the year white chocolate got its moment.”

Another quipped: “Glad to see Christmas chocolate in shops before August bank holiday!”

Give me some, my mouth is watering!

“They are absolutely amazing,” said one early tester.

“Give me some, my mouth is watering,” another demanded.

“Oooo these look good!” declared another.

“These are a bit of me,” another chocolate fan confirmed.

If you feel the same, head to the GB Gifts website here and order yours now.

Others did comment, however, that they have already spotted them on sale in Nisa stores.