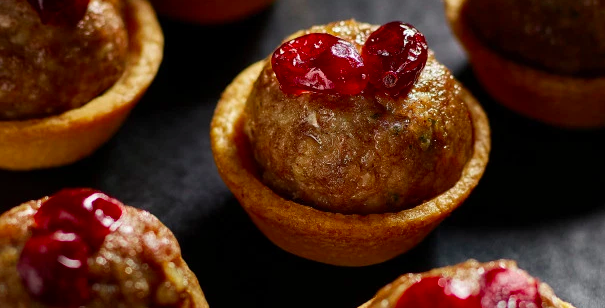 The food chain has some amazing Crimbo offerings this year

Instead of the traditional mince pie filling, Morrisons is offering ones filled with pork and stuffing.

The mince pies are part of Morrisons’ Best Range and contain British pork mince, orange and lemon zest, and are topped with cranberries.

There is also a second type of the festive treat on offer: florentine mince pies.

Another new remix of the humble mince pie, these contain morello cherry mincemeat and feature an almond, citrus peel and cranberry topping.

Additional scrumptious offerings include Christmas tree shaped crisps, that look as festive and yummy as you could imagine.

These cheeky treats are tortilla chips shaped as Xmas trees and are made with a spinach base and flavoured with just a hint of pine.

Up next are several more savoury nibbles, that are perfect for Christmas Eve appetisers or as hors d’oeuvres at your Christmas party.

These include duck waffles that are crispy little pastry bites topped with shredded duck and hoisin sauce.

Then there are katsu croquettes, which are filled with sweet potato, carrot and red pepper and finished off with a katsu curry sauce.

And if you’re a fan of a boozy Christmas, you’re definitely in luck here, as Morrisons has also included a clementine and Prosecco jelly shot.

It looks like this year supermarkets are in fierce competition against one another to launch the most appealing and unique take on festive food and booze.

Asda has just revealed its Christmas flavoured gins, that include mince pie and marshmallow flavours.

And Sainsbury’s is competing with orange and sugar plum flavoured Christmas gins.

Even the Co-Op is getting in on the action, and will be selling cauliflower cheese flavoured crisps during the festive season.

Will you be tucking into Morrisons’ Christmas range? Tell us what you think of it on our Facebook page @EntertainmentDailyFix.